I hope you have all had an enjoyable and relaxing Christmas holiday and I welcome all comers to our first meeting of this new year, with Dr Martin Purdy giving us a talk on one family’s unique legacy to a Lancashire Fusilier lost in the fighting at Gallipoli.

The main gate and lecture room door are open at 7pm but if closed please press the buzzer button marked BAR, by the gate, and Les will open up. This earlier start gives everybody more time on arrival to get settled and socialise. We still have to respect security issues surrounding our venue.

I hope those who attended our Xmas social night on 6th December enjoyed the speaker, Kate Wills, but especially the first branch cold buffet with wine and soft drinks. The Branch committee of Andy McVeety, Joan Tomlinson, Phil and myself again give our warmest thanks to all members for your ongoing attendance and interest shown during 2019.

Although the centenary years have ended I’m sure we will continue to be absorbed by this momentous, world changing, war that altered the path of so many lives and families, directly affecting all the population of the UK and its Dominions in one way or another. We will continue with this aspect of special historical interest and monthly remembrance with the help of a variety of top speakers. I can report that we have such speakers arranged for February (14th) with Professor John Bourne, talking Tolkien, then in March (13th) we have Dr Jessica Meyer on the subject of WW1 casualties, their immediate rescue, treatment and removal to better facilities at the rear, unfortunately our April speaker Geoff Spring has had to cancel for health reasons but I’m confident of finding a replacement by the next meeting.

The Gallipoli Oak: A Story of a Family’s Unique Legacy to a Lancashire Fusilier by Dr Martin Purdy

In March 1922 a Lancashire businessman stepped from a cruise ship onto the Gallipoli peninsula. He was accompanied by a host of other pilgrims equally as desperate to visit this Mediterranean outpost as he and his wife, but what made James Duckworth stand out was the fact that he stepped ashore with a bucket of water containing the sapling of an English oak tree.

Unlike many of their fellow travellers, the Duckworths were not in search of a grave (their son Eric’s body had no known resting place) but a mark on a map drawn up from a collection of precious letters and drawings showing where the 19-year-old had last been seen slumped dead in the Ottoman wire.

The Duckworths would ultimately decide against planting the tree sapling on the spot marked on the map, but instead choose a nearby Imperial War Graves Cemetery called ‘the Redoubt Cemetery’. This cemetery contained the bodies of many of their boy’s comrades from the 42nd East Lancs’ Division, including many from Eric’s own platoon of the 1/6th Battalion of the Lancashire Fusiliers.

Duckworth Snr wrote. “A large obelisk memorial, visible far out at sea, is to be erected on Cape Helles and the work is well in hand. Whether politics dictates that future control of the peninsula is to be Turkish, British or international, this narrow strip of land, washed at times by the sunny and at times stormy seas of the Aegean, in sentiment at least will remain ‘forever England’.”

The ‘large obelisk’ would go on to bear the engraved name of his son upon it, along with the names of 21,000 more British servicemen who had died as part of the Gallipoli campaign and had no known grave. Still, unlike the other names engraved, this young East Lancastrian would have an additional memorial - one that had crossed the seas in a bucket and become the concern of a family of Turkish gardeners.

Dr Martin Purdy, who co-authored the book The Gallipoli Oak with Ian Dawson, tells the story of this unique and still thriving Lancashire memorial and the large number of local men whose sacrifices it has helped to keep alive.

A former newspaper editor, Dr Martin Purdy is an expert in the social and cultural impacts of the First World War. Born in Rochdale borough and now a resident of Ramsbottom, he has worked as a freelance WW1 expert for the like of the BBC’s Who Do You Think You Are? franchise for many years and had numerous magazine, newspaper articles and academic works published on a wide variety of themes related to the conflict. In 2008 he wrote a book for the BBC (republished in 2013) on how to research servicemen and women of the Great War and then use the information to plan a battlefield tour. He has also co-authored two acclaimed WW1 books, “Doing Our Bit” and “The Gallipoli Oak” – the latter being the focus of his talk for us. A Doctor of Philosophy, and lead historian at the Westfield War Memorial Village Lancaster, Martin fronts the award-winning folk and storytelling trio Harp & a Monkey, who toured an acclaimed Arts Council funded WW1 show around the country during the centenary of the conflict - a show that aimed to challenge common misconceptions about the war.

As the Branch held its December meeting, Kate Willis gave it a seasonal flavour as she included how Christmas celebrations were held throughout the war by the soldiers at the Front. Her talk also included pictures of the various ways the men and women of the Armed Forces were given relief from the strains of combat.

Although the Kaiser believed his army would be victorious before the leaves fell and the French President was confident his troops would be home to gather the harvest in time for Christmas, Kitchener warned that the conflagration would last for at least two years. The stalemate in the west, formed by the inability of either side to outflank each other and the flooding of the Belgian lowlands, brought about a stand-off that would last for four years. During that time on the Western Front the Allies and the Germans faced each other in a continuous line of trenches which only marginally changed until the final year of the war, excluding the retreat to the Hindenburg Line and the Spring Offensive.

As the British Army began to receive more men, many of whom were volunteers and family men, the oncoming of the Christmas period made all the combatants on both sides reflect on being away from their loved ones. Society as a whole wanted to ensure that these men would be able to have some token to remind them of the families at home over the holy period and have some form of celebration of Christmas in their enforced trench existence. The Christmas Truce of 1914 has been well documented and the degree of fraternisation including the ‘football match’ is still debated on as to what actually happened. 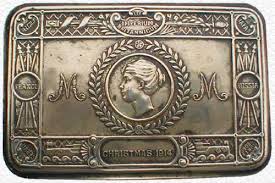 In 1914 Princess Mary organised a personal Christmas box for each member of the armed forces, containing tobacco or cigarettes with toffees, acid drops for non-smokers and a card from the Princess (photo above). Serving nurses received chocolates instead of smoking material. Also welfare units such as nurses would follow their relevant units throughout their campaign-In late 1915, the Serbian Army was pursued through Albania by the Austrians and several British nurses were with them as they headed for the coast. The conditions were grim.

Kate then gave examples of how serving personnel received or organised functions to soften the blow of the continuing hardships of war. The comforts for soldiers continued throughout the war.

Often non-combatant units such as the RAMC performed Christmas pantomimes for the troops to which they were attached (see photo below of a pantomime concert party). For example, 85 Field Ambulance performed pantomimes for every unit in 28 Division in Salonika. The essence of Kate’s talk was the many photographs Christmas cards, pantomime programmes and other materials which were strikingly brilliant. Those who were present enjoyed these photographs and images that in themselves brought back the essence of the period. It is difficult to expand on the information that Kate provided, or correlate the images and items shown on the screen, for the benefit of members who were unable to attend. 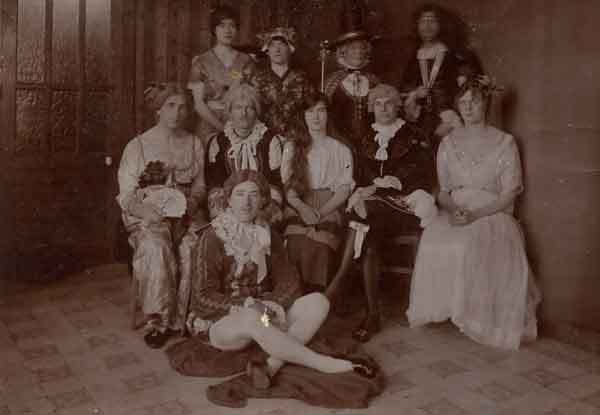 After the talk the audience enjoyed a buffet and wine supper, with the granddaughters of Branch Chairman Ralph Lomas ably assisting in its preparation.