For our forthcoming meeting we welcome  Peter Hart, who I’m sure, will give us an  interesting and entertaining talk on the last  six weeks of the war based on his recently  published book “The Final Battle:  Endgame on the Western Front, 1918”.  Anybody willing to be our next Chairman or just come on the committee please speak to or email myself. Tel: 01625 511645(W) or Email: This email address is being protected from spambots. You need JavaScript enabled to view it.  The purpose of the WFA and Branch  meetings is ‘remembrance’ and ‘education’.  The WFA do this through its magazines, website and conferences but most significantly its network of Branches  throughout the UK and overseas. The WFA currently have 53 branches throughout the UK. There are just under 6000 members who have all paid a subscription of £29 each to tap into the Great War network and receive the two high quality publications, “Bulletin” and “Stand To!”.  I can report that we now have speakers arranged right through until next June with Jack Sheldon in October, then Clive Harris and Rob Thompson taking us up to Christmas. As good a list of top military historians as you’ll see anywhere?  May I remind you that the 8 November meeting includes our usual brief but meaningful remembrance ceremony at 7.45pm. The bugler is booked!!!

PLEASE NOTE the last meeting before Christmas will be on the first Friday (6th) in December, not the usual second, so a note in your diary please. Last year, various members were unable to attend due to office parties etc therefore a change seems to make sense.  This will be our Xmas social night immediately after the speaker. For this we will provide a cold buffet supper with wine and soft drinks, and I hope, with Rob Thompson as our guest speaker, we will have a good turnout of members.

Peter Hart will be speaking on the fighting on the Western Front in the final six weeks of the Great War in 1918.

Imagine the situation: you have been fighting for four long years. Somehow you have survived, although many of your friends are dead. Now, just when your ordeal seems to be coming to an end, you are required to make one last effort, risking life and limb in the closing battles to hammer home the defeat of the German Army. Not everyone can take it easy on the final straight and the temptation to shirk must have been enormous. Yet, for the most part, men dug deep to summon up the inner resolve to fight on and ‘finish the job’. 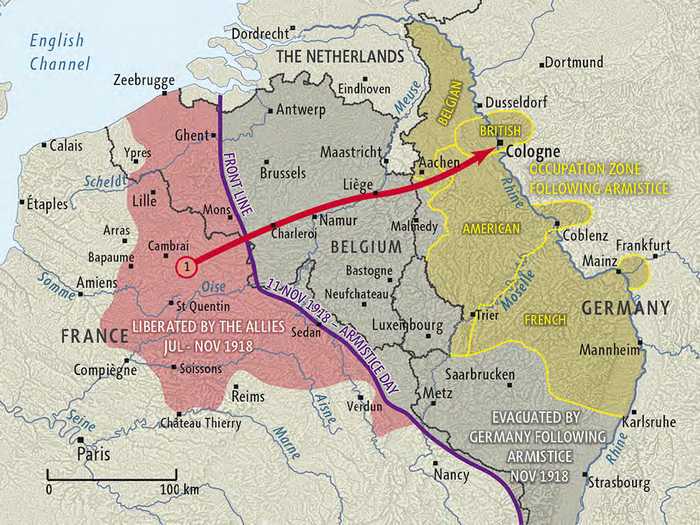 The Germans had fallen back in disarray, taking shelter in the comforting fastness of the Hindenburg Line. This had served them well in the past—they had high hopes that it would serve them well again and were confident that they could prolong the war into 1919, if not beyond.   The Allied Supreme Commander, Maréchal Ferdinand Foch, coordinated a sequence of offensives that cracked open the Hindenburg Line with the result that German resistance began to crumble. The Fifth Battle of Ypres, the Battles of the Sambre, the Selle and the Meuse-Argonne, all victories for the Allies.   Yet what do we remember of them? Scant details appear in general books on the war; there is little of relevance in most works devoted solely to 1918. These huge offensives were intended to smash through the German lines, allowing no time to rest, no chance to bring up reserves, no time for the German commanders to catch their breath and review the situation rationally. The German High Command was left helpless, scrambling to react to situations that were already in the past. Unable to second-guess where the Allies would strike next, and without the manpower or resources to be strong everywhere, they stumbled from disaster to disaster.

The German Army may have reached the end of its metaphorical rope in the summer of 1918, but, even after four years of carnage, there were still plenty of grim unbending soldiers willing to carry on fighting to the very end.  Their sputtering machine guns and booming gun batteries took a heavy toll of the attacking Allies. Many German soldiers demonstrated an unbelievable resilience, contesting every yard of ground, despite the dawning realisation that their cause was hopeless. Their sacrificed lives bought time for their comrades to retreat, take up new defensive positions and continue the resistance. Heroism and tragedy were all around during the final days of that terrible war.

Met Police give green light to the WFA’s Remembrance ceremony

Further to last month’s worrying announcement the Met Police have now contacted the WFA to confirm that they will be supporting the WFA Cenotaph ceremony this year and will continue to do so.   The Cenotaph Committee of John Chester, Rich Hughes and Colin Wagstaff, are planning for the 2019 Ceremony and details will be confirmed on the WFA website, next Stand To! and via email to Branch Chairs.

Members are asked to assemble by 10.20am at King Charles Street and will parade out at 10.40am to the Cenotaph.   After the Cenotaph ceremony there will be the usual service 12.15pm at the historic Guards Chapel at Wellington Barracks on Birdcage Walk, followed by an informal lunch at the Albert Pub, 52 Victoria Street, SW1H ONP afterwards at 1.30pm. For lunch - book via the office.   If you have a family member who died in or after the Great War this is a great opportunity to get close and personal to the Cenotaph where you can lay your own wreath. All members welcome!

As usual, the Branch turned out to welcome the ever popular guest speaker, Professor John Derry who looked at the after-effects of the Great War.

Since its ending a century ago, the Great War and its consequences have figured in much of contemporary academic history. Thirty five years ago, George Barrowclough wrote his work on the origins of modern Germany. However, like many contemporary analysis there was too much emphasis on the cause rather than the effect of the conflict.

In any historical analysis, the aim is to prove cause and effect. However, this is difficult and indirect consequences are hard to prove. The last century saw the two greatest conflicts in the world’s existence. However, things happening to the great regimes had already been in action notwithstanding the inevitable effects of the World Wars.

At the end of the Great War, the world was astonished as great regimes seemed to tumble. However, three empires were already declining and the fourth unexpectedly failed. The Romanov Empire was extant from the 17th Century and was subject to violent removal of existing autocratic leaders - Catherine the Great was instrumental in the assassination of her husband. In 1905, after the defeat by Japan, social unrest led to a semblance of reform but underlying tensions remained. During the Great War, Russia suffered early defeats by Germany at Tannenberg and the Masurian Lakes. The army’s poor showing eventually led to mistrust of the regime.

The actions of the German born Tsarina with Rasputin and the Tsar’s inept handling of the army inflamed the situation. Germany took the opportunity to weaken their enemy on the Eastern Front. They arranged to bring Lenin in a sealed train from Switzerland through Scandinavia to St. Petersburg in order to persuade the masses to reject the war. Although the fighting between the Bolsheviks and the Imperial forces and allies would continue up to 1920, it effectively removed Russia’s physical support of Britain and France. Thus the Russian Imperial Empire and its ruling family ceased to exist.

However, Germany also had to deal with the loss of another empire which had been its ally. The Hapsburg dynasty evolved from the Holy Roman Empire, although it was none of the three systems in its title. The dual monarchy of Austria and Hungary effectively began the war when it shelled Serbian Belgrade. However, its multi- national population caused problems of command and the internal tensions of the minority groups caused unsolvable problems. The split nature of its structure always undermined any unity and was reflected in its army, famously considered by the Germans to be like fighting whilst shackled to a corpse. It too failed to survive the conflict.

The Ottoman Empire controlled much of central Europe during the middle centuries, but became subject to pressures from the Romanovs and Hapsburg dynasties. The continual frictions in the multi ethnic Balkans brought about unrest and the Ottomans were gradually pushed back to Turkey. Although the Turks effectively rebutted Churchill’s hare-brained Gallipoli fiasco, it failed to stop the continuation of its decline of control in the Balkans that had seen confrontation in there during much of the 19th Century and it gradually lost most of its control in that area.

The German Empire had evolved over the 18th and early 19th century. Initially the many German states had been involved in clashes with each other. However, under the control of Bismarck, the Hohenzollerns, after the defeat of Austria in 1866, were able to encourage the other Germanic states to enjoin with Prussia. This created a nation which, by the early 1900s had overtaken Great Britain as the world economic power second only to the USA. Unfortunately, its unstable Kaiser Wilhelm II sacked Bismarck and effectively removed any control of his maniac tendencies.

Germany had been the leader in providing social benefits but these had been used to placate dissenters and although the Social Democrats had a majority, the Kaiser still appointed ministers until 1918. During the war, the Imperial power still held and with the defeat of Russia it anticipated it could win the war in early 1918 before the likelihood of the USA entering the fray. Unfortunately, the effects of the British blockade outweighed this temporary opportunity and ultimately led to its defeat and the removal of the Kaiser.

The Germans had thought that their request for an armistice would enable them to recover from the effects of the war, but were forced to sign a punitive surrender and subsequently faced a harsh sentence at Versailles. There was friction over the reallocation of peripheral territory. The tensions continued and were instrumental in the rise of National Socialism.

The failure of the League of Nations meant that continuing tensions would eventually bring about a second major conflict which the earlier peace moves had tried to forestall.

Yet another absorbing talk from one of our favourite speakers.

Website editor – If Terry will forgive me for this addendum, could I add that John referred to the loss of Ireland by the UK as being part of the effects of the Great War. In fact, the UK proportionately lost more land area than did Germany. This period was perhaps the start of the break-up of the British Empire, as the effects of the existing fracture lines were accelerated.

11 October: The German Defeat and the Myth of the Stab in the Back: The reasons for the rapid collapse and a projection forward into 1919 and beyond, by WFA Vice-President Dr Jack Sheldon