Looking forward to this Friday, 8th March, and our third meeting of the year. The evening’s talk, by author David Blanchard, is about the 1918 German Spring Offensive on the Aisne between Soissons and Reims, and its learning experience for WW2 offensives

Although the Great War Centenary years have now passed, we can look ahead and I’m sure continue to keep our group together in sharing the history of 1914/1918 and the post war aftermath. The political, economic and social repercussions are important to tie in with the upheaval caused by Germany’s instigation of the Great War.

We have the next two months speakers organised! With Terry Dean and WFA Patron, Sir Hew Strachan booked for 12th April and 10th May respectively.

Will members please be advised that the WFA President’s Conference will be on Saturday 30th March in Birmingham at the Tally Ho! Sports Club. Four top speakers. £35 inc buffet lunch.

Also the WFA Spring Conference at RAF Cosford on 27th April. Free to WFA members with optional buffet lunch at £15. Must be paid in advance via the WFA office.

The Aisne again – the essence of Blitzkrieg?

After relatively unsuccessful attacks on the Somme and the Lys, General Ludendorff sought a new sector in which to continue the heavy assaults of his 1918 Spring offensive. He chose the thinly held Aisne front between Soissons and Reims.

The German advance here was the furthest ever made, on one day, on the Western Front since the advent of trench warfare in late 1914. On the first day of the battle the German army advanced fifteen miles, opening up a salient twenty-five miles wide and taking almost 25,000 prisoners. The British Army’s IX Corps was virtually wiped out.

This talk will examine the characteristics of this German offensive that led Major General H E Essame to remark, ‘The technique now to be demonstrated in its highest perfection by the Germans [on the Aisne] was to set the pattern for most of the coming offensives of the war and to continue to be employed in World War Two on the Russian Front and finally, with remarkable initial success, in the Ardennes in December 1944.’

This talk also considers how the German’s tactical success proved their strategic failure.

Although the initial offensive was a brilliant set piece, it lost momentum in subsequent days due to poor planning and over-reaching ambition.

The Third Battle of the Aisne was the last successful German offensive of the war; thereafter the British and the French took the initiative on the Western Front. 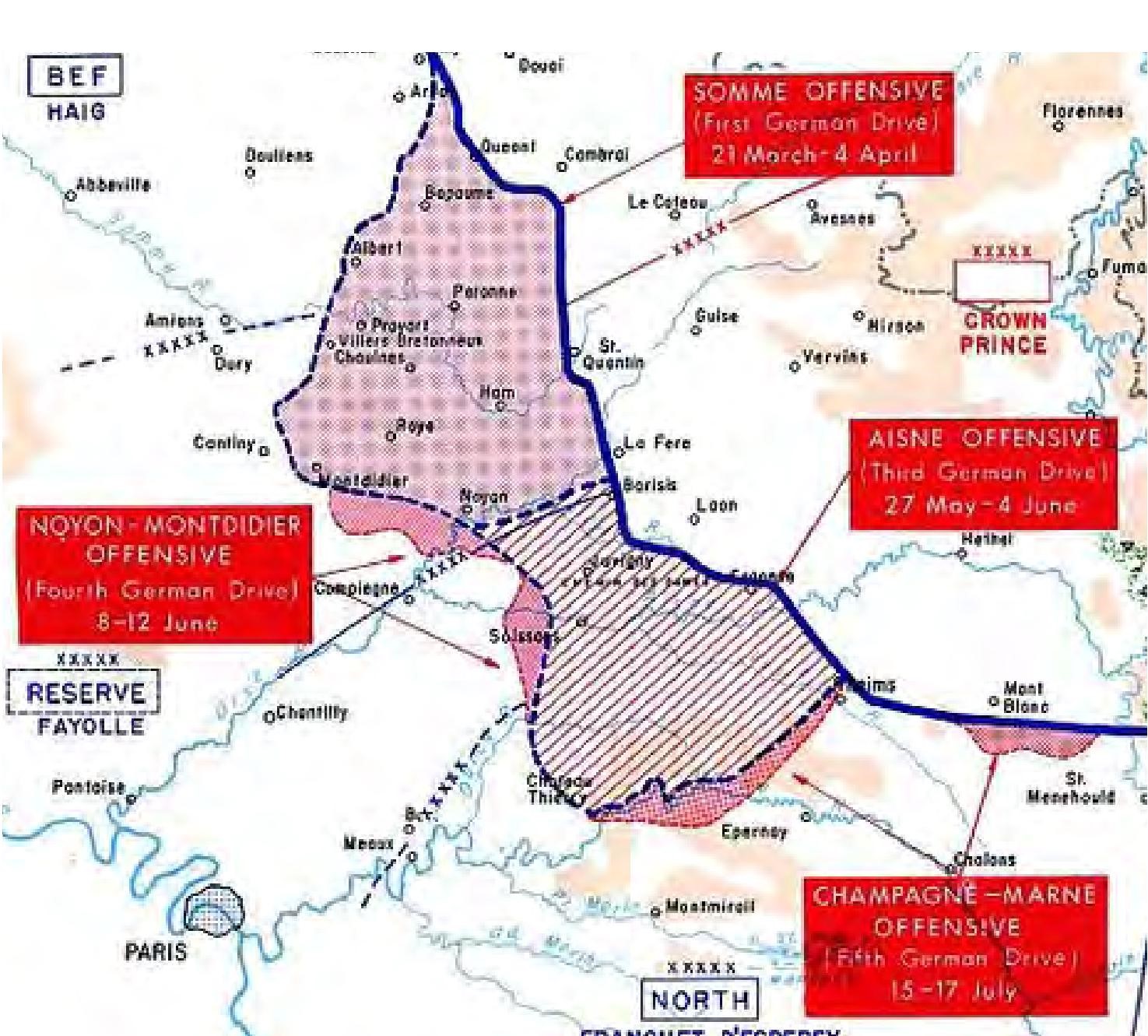 Bill Mitchinson introduced the talk by mentioning the disquiet felt in 1916 both within Parliament and the 2nd Line formations themselves over their inactivity and lack of proper preparation for overseas service. Their component units had begun recruiting in September 1914 but for the next two years the remaining 13 divisions kicked their heels on home defence, unsure of their worth and of what their future role might be. They had haemorrhaged thousands of their original members and trained men to their 1st Lines and by the end of that year, only two divisions had reached the Western Front.

Bill then very briefly outlined how he was attempting to assess the quality and performance of the seven 2nd Line divisions which did go to the Continent. By comparing their work to the successes and failures of the Regular, New Army and 1st Line TF divisions during 1917, he is analyzing how successful the 2nd Line formations were in harnessing their fighting power and the extent to which they adopted and practised developing British doctrine.

The War Office’s preference to raise, train and equip the New Armies worked against the interests of the 2nd Line. They suffered from a lack of manpower and suitable equipment until well into 1916 and had their ranks filled with Derbyites. Many of these newcomers had no territorial affiliation to their divisions’traditional catchment areas. There was a general perception that if these divisions were to go to France, not a great deal could be expected of them. This belief seemed to be quickly confirmed by the failure of 61st (2nd South Midland) Division to take and hold any ground at Fromelles.

Having discussed the divisions’ early trials and tribulations Bill then divided the talk into three sections: patrolling and raiding; semi-open warfare, and offensive operations. Not all of the divisions enjoyed a period of trench acclimatization. Instead, on arrival some were thrown almost immediately into their own portion of line and expected to begin active operations. Experience was to be gained the hard way and, unsurprisingly, some of the early attempts at raiding degenerated almost into farce. Several of the brigades and battalions soon, however, began to develop the infantry skills and all-arms coordination required to conduct successful ‘minor enterprises’, while 60th (2/2nd London) and 66th (2nd East Lancashire) became particularly adept at getting into the enemy trenches and capturing prisoners, others found those requisites rather harder to acquire.

When the Germans began their withdrawal to the Hindenburg Line, 59th (2nd North Midland) and 61st Divisions were heavily engaged in following the enemy across the devastated ground. Having to contend with the physical obstacle of the Somme and also the need rapidly to acquire the ways and means necessary to keep the divisions sustained were particularly challenging. When 59th Division came up against the fortified villages of Le Verguier and Hargicourt, its naivety and innocence became all too tragically apparent. Just about everything that could go wrong in the planning and execution of its attacks in early April did; these failures caused the division quickly to have its GOC, one of the brigade commanders and a battalion CO replaced. 61st Division did a little better but also demonstrated some poor staff work and inadequate artillery-infantry coordination. Meanwhile, 62nd (2md West Riding) was not thought to have done particularly well at Bullecourt whereas 58th (2/1st London) was lauded for its activities during the same battle.

The bulk of the talk was taken up with an assessment of the 2nd Line formations during the offensive operations of 3rd Ypres. 60th Division had gone to Salonika but all other 2nd Line, with the exception of 62nd, took part in the offensive. Bill selected particular engagements to demonstrate how the divisions performed in the gruelling conditions and compared them in terms of ground gained and their ability to focus the different components of fighting power against divisions in the same corps or to those working on their flanks. The planning, administration, preparations, liaison, inter-arms cooperation and execution of 184 Brigade’s series of attacks against the so-called Battery Position, 59th Division’s assault towards Otto Farm, 66th Division’s attack against the Bell Vue Spur and 57th and 58th Divisions’ attempts to draw fire from the Canadian assaults up the Passchendaele Ridge were discussed with the aim of drawing out whether the staffs had understood the character and requirements of the battle to be fought, the extent to which the training had followed the most recent doctrinal developments and whether the physical component of fighting power had been adequately provided and sustained. There were several, predictable, disasters but the overall conclusion was that the 2nd Line divisions generally fared no better or any worse than the other, more experienced divisions engaged.

Bill concluded with a brief outline of what had happened to those 2nd Line divisions which had been retained in the UK or disbanded, and of what those in France were to achieve in the defensive operations of March-April 1918. This period of their activities, he suggested, warranted a talk to itself because, while most of the divisions had lost just about all of any territorial affiliation or identity, they were heavily involved in set-piece battles and the consequent withdrawal back across the Somme. Some were reduced to cadre and then reconstituted before next becoming engaged in the Hundred Days.

I am a member of the WFA. I have 272 original unbound issues of “The Great War” the standard history edited by H W Wilson. I am looking to dispose of these and wondered if they are of any interest to any individual member. I am not looking for any payment. They can be collected from Marple, Stockport.

John Hulme   This email address is being protected from spambots. You need JavaScript enabled to view it.

The WFA has established a weekly audio podcast called Mentioned in Dispatches, hosted and edited by the author.

A broad range of subjects are covered and we have examined the Battle of Arras, women in the Great War and the key individuals such as Brigadier General Frank Crozier.

The programme has two formats, either interviews with guests, such as authors, academics or historians, or lectures given at WFA conferences or branch meetings.

There have been 70 episodes recorded to date (at time or writing) and have featured well known experts such as Andy Robertshaw, Dr Nick Lloyd from King’s College London and Jack Sheldon.

For those unfamiliar with podcasts they are digital audio file made available on the internet for downloading to a computer, smart phone, tablet or mobile device, typically available as a series, new instalments of which can be received by subscribers automatically.

Podcasts are free to listen to and can be accessed by two methods:

If you have any suggestions for topics to be covered or people to be interviewed, please contact: This email address is being protected from spambots. You need JavaScript enabled to view it.

10 May:  The Bulgarian surrender and the end of the war by Sir Hew Strachan, WFA Patron