We look forward to this Friday, 12th March, and our fourth meeting of the year. The evening’s talk is by Terry Dean, editor of the Despatch and member of the North Lancs Branch, and is a focus on the Royal Field Artillery Territorials of the West Lancashire Brigade.

Next month, on 10th May, we have the honour to welcome as our guest speaker the WFA Patron, Sir Hew Strachan which I’m sure will be a highlight in our year’s programme.

Please be aware of the WFA Spring Conference, and AGM, at RAF Cosford, Shifnal, Shropshire, TF11 8UP, on 27th April, doors open at 9.30am with tea and coffee available prior to a brief welcome by the President Peter Simkins at 10.15am.

For the conference element there are two very relevant talks before lunch.

The talks are free to WFA members, and their guests, followed by an optional buffet lunch (12.20pm) at a cost of £15. This must be paid in advance via the WFA office. The AGM, which is only open to full members, starts at 1.20pm.

It’s clear the focus of First World War remembrance has often been on ‘the fallen’ and it is not hard to understand why – according to the CWGC an estimated 950,000 service personnel from across Britain and its Empire made the ultimate sacrifice.

However, given that 8.7 million people donned a military uniform, it raises some serious questions about why tales from the majority group, ‘the survivors’, have continued to play a lesser role in the popular narrative. It is an anomaly that is particularly harsh on the 1.7 million veterans who returned home with a disability, either physical or mental.

The WFA is committed to remembrance of the conflict and we should remember all those who joined up and gave service at that time.

The war did not end in November 1918 for the overwhelming majority of British servicemen and their wives, but instead continued to impact upon many of them for the rest of their lives. Furthermore, their actions (some shaped by their war experiences) contributed to the social evolution of the nation.

The WFA already engages with the public and encourages where possible to share their stories of parents and grandparents who survived the conflict.

We must try to inspire people to think about the Great War beyond the battlefields, and its lasting legacies both positive and negative. Ralph.

The story of the part-time Territorials of the 1st West Lancashire Brigade Royal Field Artillery in WW1 based on Captain Wadsworth’s book which records their exploits. The Brigade exchanged their twelve out-dated 15-pounder field guns for 18-pounders in September 1915 and crossed to France.

They gained experience on quiet sectors of the front then fought in the Somme battles from late July 1916 before moving to Ypres where they doubled their firepower to twenty-four guns. In September 1917, after providing artillery support to aid the taking of Hill 37 south-east of St Julien, their war continued in south Cambrai where they helped withstand the Germans’ severe counterattack on 30 November. After this they moved to Givenchy and opposed the German’s Georgette offensive in April 1918, before partaking in the advance to victory.

WFA member, Fae Jones, travelled with Battle Honours Ltd, for the WFA tour of 17/20 October 2014 to visit the Aisne battlefields where her Grandfather, Pte. George L. Collins, 204071, 2nd Bn East Lancashire Regiment died of wounds on 27th May 1918. He is buried at Vailly-sur-Aisne British Cemetery. Although she had visited the grave twice before, this was a particularly poignant occasion. Fae had recently discovered further details of the circumstances surrounding his death.

After placing details about her Grandfather on the ‘Remember on this Day’ column on the WFA website, Fae was contacted by WFA member, Fred Ashmore, who had further information and had written an excellent article in ‘Stand To’. Fred’s Uncle (also Fred Ashmore) of the 1/6 Battalion, Durham Light Infantry had also been involved in the 3rd Battle of the Aisne on 27th May, 1918 and he had, likewise, been wounded and taken to the CCS No 37 at Mont Notre Dame. Fred had records to show that his Uncle was buried at the Mont Notre Dame Military Cemetery before re-burial at Vailly-sur-Aisne and that George Collins had suffered a similar fate. Forty-six British soldiers and two members of the Friends’ Ambulance Unit were in the same situation, all finally being laid to rest at Vailly. They later visited the site of CCS No.37 at Mont Notre Dame and placed another memorial cross in the porch of the local church.

The group were able to honour the memories of George Collins and Fred Ashmore, by sharing, with Fae, the placing of a posy on her Grandfather’s grave, and the placing of a wooden cross and poppy at the grave of Private Fred Ashmore. This moving occasion linked the stories of two individual soldiers who had died in WW1. The link was only made possible through the WFA connection.

Fae comments, “It really made me proud to be a member of the WFA giving me the opportunity to travel and investigate with such a professional team and I hope the Association continues for a long time.” 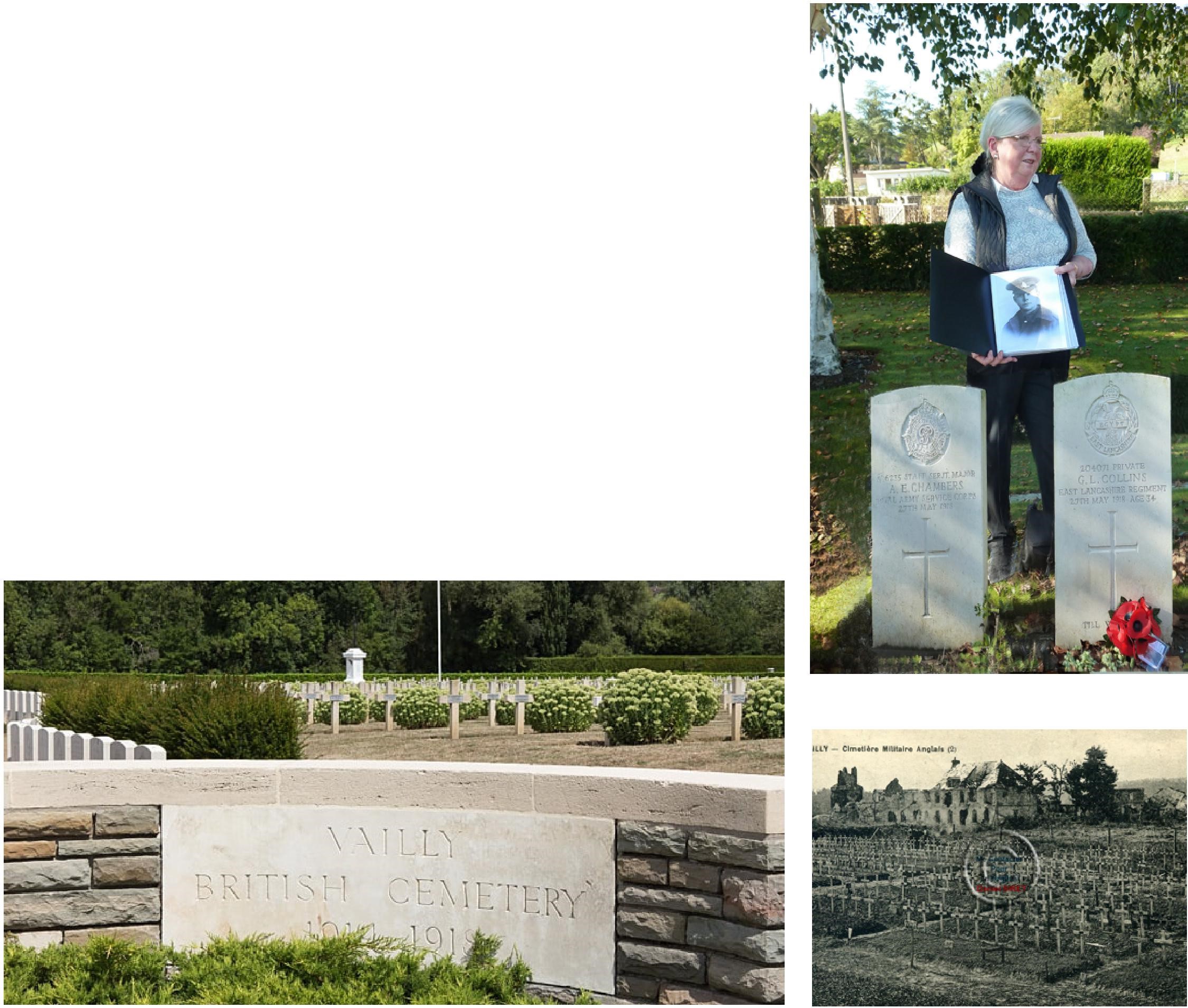 Fae Jones at her grandfather’s grave at Vailly-sur-Aisne

The Aisne was the subject of several battles during the war and David Blanchard looked at the German assault of May 1918. In 1914 it had marked the beginning of trench warfare. Both sides were unable to gain a victory. The Germans dug in, having the advantage of holding the high ground. Both sides tried to outflank each other unsuccessfully in the ‘Race to the Sea’. This formed the initial trench lines from the Swiss Border to the Belgian coast. It was also the site of the ill-fated Nivelle offensive of 1917. The losses of the French were ultimately to cause British forces to be brought into the area to hold the line. In 1918, as a continuation of the German Spring Offensive, it was the site of the Blücher-Yorck attack.

The terrain of the Battle was along the Chemin Des Dames, an old road running east to west which was below a plateau and above the steep sided banks of the Aisne. In May 1918, IX Corps took over part of the French line. It had been intended that this would be an area in which the Corps could recuperate.

At 1am on 27th May, the enemy’s VII Army began a bombardment with 6,000 guns, which had been predicted by German POWs. It extended along a front of 24 miles from Soissons to Reims, including areas either side of the main attack, to hide the ultimate aim of the assault. It was organised by Colonel Bruchmüller and was at that time the heaviest of all the enemy shelling, including gas, to precede an assault. Every battery, village, farm, railway station, bridge and road junction was targeted to a depth of three thousand yards. Photo right: Aisne 1918 - British troops await the enemy 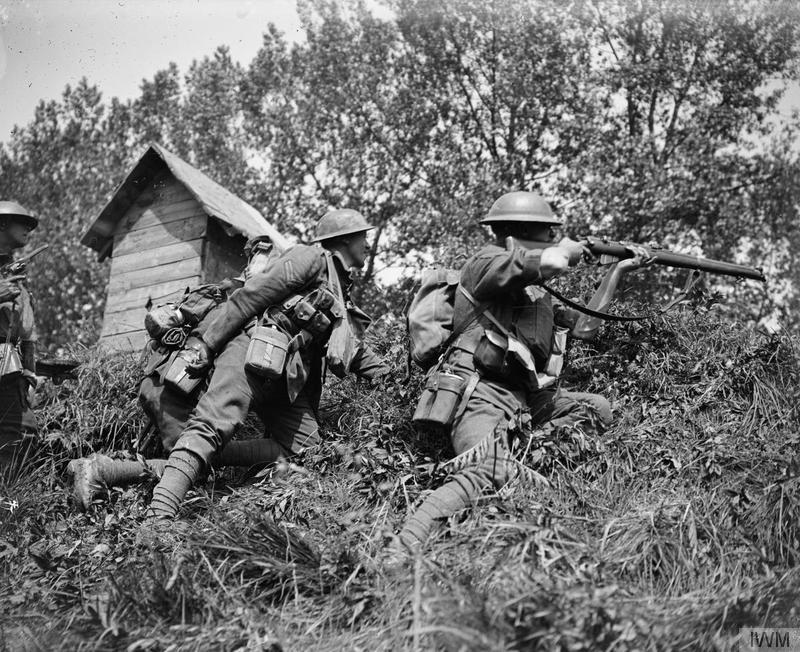 The shelling began with gas followed by a mixture of gas, high explosive and mortars. British batteries were targeted by counter battery fire. Although the shelling was relatively short (2 hours), it was concentrated. Surprise was achieved and gas did not impair vehicle movement.

At 3.40 am, with dawn still to break, German infantry advanced. Many Allied units found themselves greatly outnumbered. Twenty five German Divisions had attacked 5 French and 5 English Divisions and by midday the Germans had captured the Chemin de Dames Ridge, taken at great cost by the French in 1917.

All British headquarters had been under fire and communications were cut. The Front line of the British infantry was devastated and the enemy took them easily. 21st Division of the Corps felt the full weight of the attack of 2 German Divisions with a Reserve Division, which was replicated along the Front. A depth of up to 13 miles was achieved and much of the communications had been cut. Some 3 million shells including gas were fired by the enemy. The enemy also initially achieved air superiority.  Nineteen Enemy tanks (converted from vehicles captured at Cambrai) were used but were behind their troops and too scattered to achieve maximum results.

Many soldiers were captured in deep dugouts by the swiftly advancing enemy infantry Three Brigadier generals were captured including Henry Conway Rees who found himself talking to the Kaiser.

The town of Soissons fell on 28 May, and over the following days the Germans drove further towards Château Thierry and the River Marne, where Allied forces fought to hold back the advance. Allied divisions were rushed into the fight and the Germans were finally stopped at the River Marne. In one of their first major engagements, American troops launched several counter-attacks which threw back German units that had made it across the Marne. Exhausted and at the very limit of their supply lines, the Germans ended Blücher-Yorck on 6 June. At their height the Germans had been less than 40 miles from Paris. 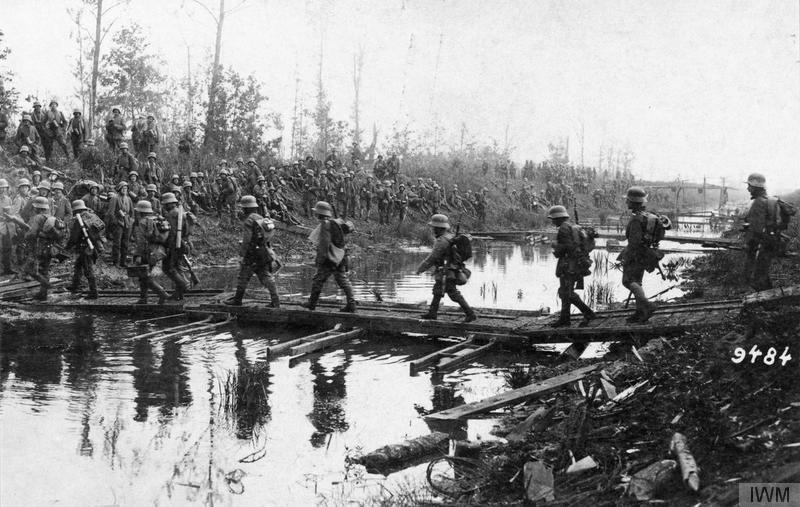 Although the enemy had inflicted many casualties, they could not sustain attacks with diminishing resources. Again no strategic victory had been obtained and as their elite troops were being worn away the potential of US Army resources was continually increasing.

Despite the warnings, Ludendorff began another attack on 11 June along the Matz but again early success petered out. A final attack on the Marne also failed and Ludendorff finally called off the whole offensive. In due course the Allies were able to combine their resources for the 100 days assault which commenced at Amiens on 8 August and eventually led to the Armistice on 11 November.

A detailed and well sourced talk. 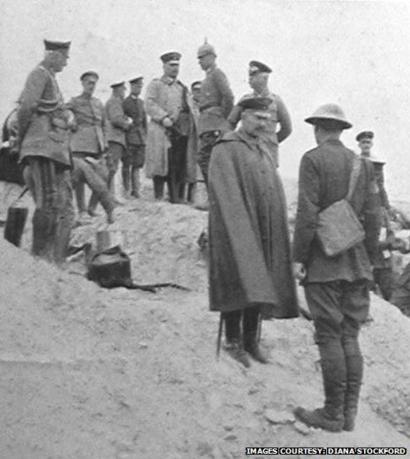 On 11 March 1919, the Daily Telegraph published an article of the Army’s disposal of horses and mules under the heading ‘The Demobilised Horse’. The following is a precis of it.

Since the Armistice the War Office had sold 57,948 horses and mules in the United Kingdom for approximately £2,000,000. (Multiply by 50 for 2019 prices) This added to the much needed Exchequer’s account and relieved the Army of the cost of feeding and organising those animals’ welfare. The records were also showing that sale prices were continuing to rise (Approximately by 2 shillings per day).

The Army had issued a realistic appraisal of all the stock which attracted buyers from all walks of life. There were all kinds of animals from ‘Riders’ to heavy draught horses. Prices ranged from about £15 to three figures

Unfortunately many horses were in poor condition and were disposed of humanely in their theatre of war. Others were sold in France to help in the reconstruction of the devastated areas. They were also well sought after in the other Theatres. The Army branded the animals as surplus with an 8 and this was regarded as an honourable recognition of the animal’s war service. Heavy Draughters were in high demand and the average price for all animals was £40

The horses were shipped back to England from the ports used during the war. They were docked at Southampton and Tilbury with some at Hull. A train ferry ran between Calais and Richborough in Kent and all animals were placed in quarantine for a fortnight.

The War Office also arranged a loan scheme for draught horses. 50,000 were let at a rental of £7.10s pa with free veterinary inspections. After 6 years the lessee became the owner, subject to two weeks army training each year if required.

My thanks to Dr. Derek Brumhead MBE (New Mills local historian) for drawing my attention to this article. TJ