The commemorative stones will be unveiled exactly 100 years to the day since they were awarded the Victoria Cross.

As part of the national World War One centenary commemorations an engraved paving stone will be laid in the birth towns of soldiers who were awarded the Victoria Cross. Stockport has two recipients: Wilfred Wood and James Kirk.

Wilfred Wood was born in Hazel Grove on 2nd February 1897 and was a private from the 10th Battalion, the Northumberland Fusiliers, and was awarded the Victoria Cross on 28th October 1918 for his bravery and initiative at the Battle of Vittorio Veneto in Italy which took place between 24 October to 3rd November 1918 and was seen as a decisive victory that contributed to the end of the War. His selfless actions whilst under fire caused hundreds of enemy soldiers to surrender. He returned home to Hazel Grove working for London and North Western Railway (LNWR) for 46 years, and was married to Bessie for 57 years. Wilfred Wood died in Stockport on 3 January 1982 and was cremated at Stockport Crematorium on 8th January, 1982 and his ashes were scattered in the Garden of Remembrance.

On 28th October 1918, near Casa Van, Italy, when a unit on the right flank having been held up by hostile machine guns and snipers, Pte. Wood, on his own initiative, worked forward with his Lewis gun, enfiladed the enemy machine-gun nest, and caused 140 enemy to surrender. The advance was continued till a hidden machine gun opened fire at point blank range. Without a moment’s hesitation Pte. Wood charged the machine gun, firing his Lewis gun from the hip at the same time. He killed the machine-gun crew, and without further orders pushed on and enfiladed a ditch from which three officers and 160 men subsequently surrendered. The conspicuous valour and initiative of this gallant soldier in the face of intense rifle and machine-gun fire was beyond all praise. 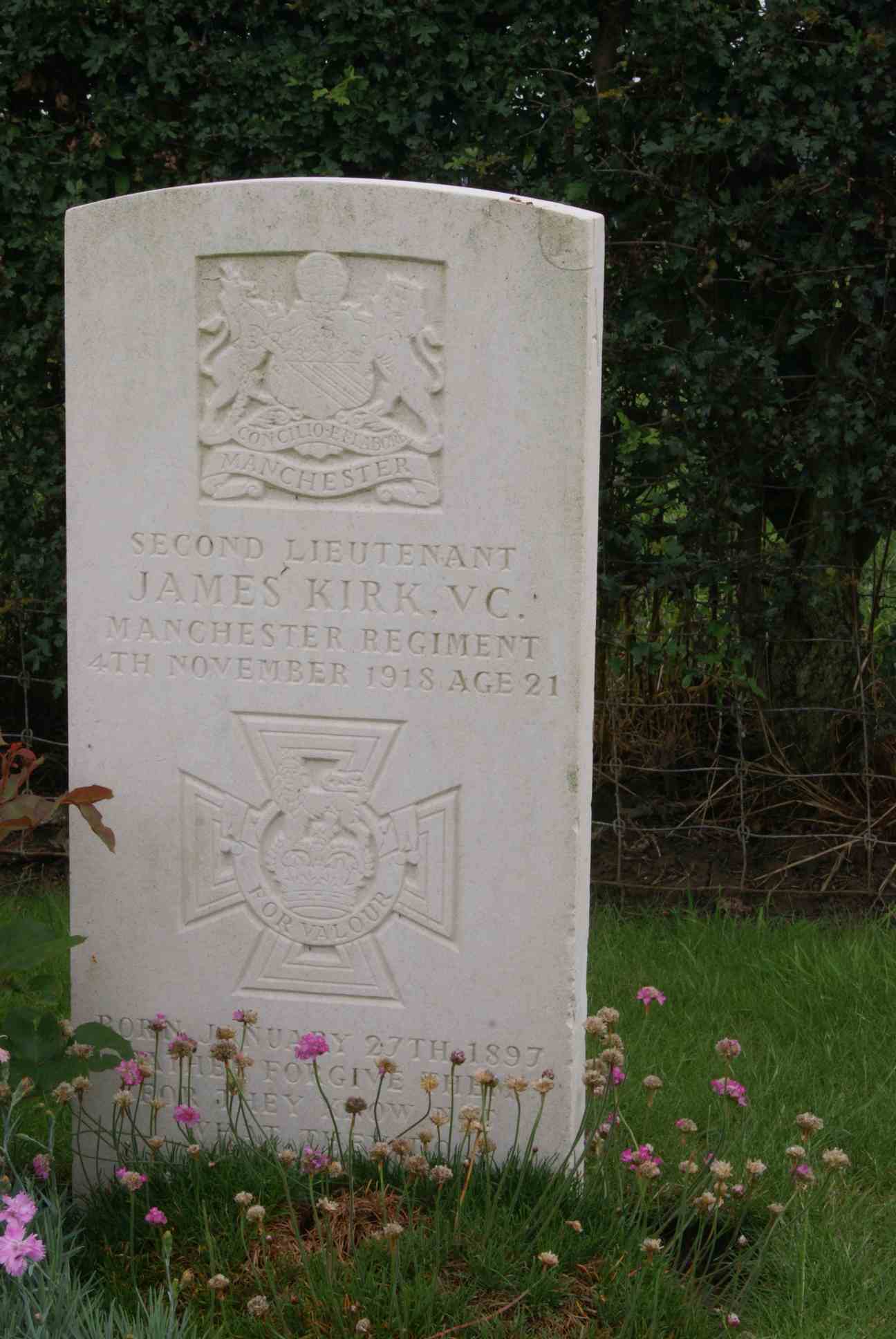 James Kirk was born on 27 January 1897 and was a second lieutenant from the 10th Battalion, the Manchester Regiment. He was posthumously awarded the Victoria Cross for his bravery and devotion to duty near Ors in northern France. His actions prevented many casualties and enabled men from his battalion to cross a bridge before it was eventually destroyed. He was killed in action on 4 November 1918. James is buried alongside the poet Wilfred Owen who served with him in the 2nd Battalion and was also killed during the crossing. They are buried in the Ors Communal Cemetery, France. The parents of James Kirk were presented with their son’s posthumous Victoria Cross by King George V in the ballroom of Buckingham Palace on 1st March 1919.

For most conspicuous bravery and devotion to duty North of Ors on the 4th November 1918, whilst attempting to bridge the Oise Canal. To cover the bridging of the canal he took a Lewis gun, and, under intense machine-gun fire, paddled across the canal on a raft, and at a range of ten yards expended all his ammunition. Further ammunition was paddled across to him and he continuously maintained a covering fire for the bridging party from a most exposed position till killed at his gun. The supreme contempt of danger and magnificent self-sacrifice displayed by this gallant officer prevented many casualties and enabled two platoons to cross the bridge before it was destroyed.

The Mayor of Stockport Councillor Walter Brett said “It is a great honour for Stockport that we can recognise Wilfred Wood’s V.C. and James Kirk’s V.C. heroic actions in the First World War, unveiling a dedicated paving stone in their honour on the centenary of the award of the Victoria Cross, along with their families, is a great privilege. We owe a great debt to them and the many that have given their lives for our freedom”.

How did Operation Michael succeed in penetrating the British defensive system when every attempt to break through the German defences had failed?

The generally accepted reason is that, in dense fog, the revolutionary German tactics overwhelmed the poorly trained and demoralised defenders of the thinly held British positions.

If the British system was inadequate and misunderstood, then how did it succeed further north on much of the Third Army front? Was Gough to blame?

I’m going to try to answer some of the questions raised by examining in detail what happened in the sector held by the 66th (2nd East Lancs) Division on 21 and 22 March 1918. MS

‘Picking Up the Pieces After the Armistice: Prosthetics and Poverty’ by Dr Martin Purdy

Dear members, I want to extend an invite to the following WFA-associated event in Rochdale on the eve of the Armistice centenary. I am a long­standing member of this branch of the WFA - having spoken at the branch on a number of occasions. If you haven’t seen this show yet, or the documentaries associated with the project (search for The Great War: New Songs and Stories on google), then please consider joining us.

Touchstones in Rochdale is to host a unique event on the eve of the centenary of the Armistice of the First World War – and attendance comes with a free local book on the subject!

From songs and stories about an oak tree that grows in memory of a local teenager, to tales of soldiers being reunited in bizarre circumstances in no-man’s land, there will be no shortage of talking points when the award-winning local folk music and storytelling collective Harp and a Monkey arrive in town.

The trio, which includes an internationally respected WW1 historian, author and broadcaster, have been performing their acclaimed First World War show around the British Isles for the past three years, in conjunction with the Arts Council and WFA.

In fact, the price of entry to the performance, on Saturday, November 10, even includes a free copy of frontman Martin Purdy’s first co-authored book on the subject, Doing Our Bit, which used the diaries and letters of local people to tell the full story of the conflict.

Martin, who is originally from Middleton and whose book titles have included offerings for the BBC’s Who Do You Think You Are? franchise and The Gallipoli Oak, about the experiences of East Lancs Territorials at Gallipoli, explained: “This is going to be a really special show, and one that is long overdue, as so much of the material is based on Lancashire people. It is by no means a ‘mud, blood and trenches’ show, but one that challenges a lot of stereotypes. Expect plenty of poignancy and laughter.”

The show is tied to the band’s critically acclaimed third album ‘War Stories’, and includes field recordings and interviews with veterans and their families, new songs and re-workings of traditional and contemporaneous songs.

For those unfamiliar with the trio, they have been described as “bold and brilliant” by the likes of The Observer, “fantastic and fascinating”by Mark Radcliffe on the BBC Radio 2 Folk Show, “excellent” by The Guardian, and “sensational” by Clare Balding on BBC Radio 2.

Until September 2018, there was a commemorative metal plaque, installed twenty-five years ago by the WFA on the German side of the St Quentin canal at the Pont Riqueval built in the time of Napoleon.

The epitaphic memorial from 1997 was commissioned by the WFA for what Prime Minister Lloyd George in 1918 described as, “the greatest chapter in British military history” - the storming of the St Quentin Canal and capture of the Riqueval Bridge by the South and North Staffordshire Regiments of the 137th (Staffordshire) Brigade on 29 September 1918.

On 29 September 2018, a beautiful crisp sunny afternoon one hundred years to the day since the successful action across and over the canal, there was a dignified re-dedication of a replacement memorial (the original was vandalised), organised by the WFA European Officer Andy Tonge. Andy introduced WFA Chairman Colin Wagstaff, Honorary Vice-President Professor Gary Sheffield and Kathy Stevenson, Chairman of the London Branch.

After Jim Tanner was invited to explain the significance of the successful capture of the bridge, the new plaque was unveiled by Kathy Stevenson who had been present at the previous WFA ceremony 25 years ago. The Kohima Epitaph was read by Olivia from the CWGC, the Last Post was followed by the French and British National Anthems and wreaths were laid.

There will be an act of remembrance at the 22nd Cheshire Regt memorial at 7.35pm, before the meeting on 9th November.