Good Evening and welcome to the March meeting. 100 years ago, later in March, the Germans embarked on their final attempt to gain a peace settlement before the huge numbers of American soldiers could be brought to support their new allies. The Enemy had an initial advantage of many units being released from the Eastern Front and a delay in the time that the raw New World units would be an effective fighting force.

The extra German strength was not without its drawbacks. Some units had been affected by the propaganda of the Russian dissidents and resented their masters continuing a costly war. Others who had fought for three years were not happy at the prospect of being transported through their homeland, where they would see the punitive effect of the allied blockade on their families. Some would also have been affected by the propaganda of the Soviets that ordinary men were being sacrificed to maintain an elite hierarchy. There was also the chance of a resurgent Russian Army arising to try to reclaim their lost lands. A substantial force would remain in the east just in case.

Thus not all the men were freed up to the Western Front. Many also thought they had done their bit and were resentful at having to travel across Europe to continue the fray. The German timeline was also restricted as the blockade hit home.

Nevertheless, due to allied shortages in the West, with Lloyd George’s attempt to remove Haig by limiting the numbers of reinforcements and the still perilous state of the French Army, there was a window of opportunity. Ludendorff decided to attack the British at their junction with the French and hopefully force such chaos that the Allies would have to sue for peace on terms favourable to the Germans.

The March attack and its subsequent assaults would test the nerve, especially of the British. Fortunately, it was not sustainable. Tactics were initially successful, but strategic victories were not won. It would be a long haul, but eventually the Allies would prevail.

I am pleased to welcome Dr Jane Orr to the Branch. She has only recently returned from a sailing voyage down under and I appreciate her agreeing to talk to us so soon after returning to dry land. The Spanish Flu killed millions and one of the notable traits was that the younger generation suffered heavily. Of course Manchester can relate to this, as the work of its then Medical Officer of Health, Dr. James Niven tackled the problem head on.

The pure military aspect of the Great War and its effects on the social structure form much of our popular history. However, it was the first modern industrial war and was fought on, in and below land, sea and air. Dave Rogers gave the Branch a fascinating insight into the complex industrial and scientific issues that the conflict created.

Unfortunately, Germany, our enemy provided most and sometimes all of the essential items with which to wage war and lessen its impact on our nation. Drugs, electrical items and optic equipment were almost completely denied us.

Fortunately it was soon realised that something had to be done. An existing body, the Royal Society contained some of the most eminent scientists and scholars in the world and the government harnessed this talent. The government brought together many of the experts and also politicians became members, as well as leading industrialists and innovators.

The whole aspect of war was considered. Aircraft, submarines gas attacks, trench maps, and wireless were just a few of the ‘hard’ items given consideration. Other issues included include the need to provide food and equipment in the field and at home. This required increased home productivity, so fertilisers and nitrogen had to be produced. The latter was also essential for TNT. Between1915-1917 forty one thousand inventions and ideas were considered.

The list was endless. Reserved occupations were needed to ensure the essential products and services for the war did not lose their talent to the military. It was also essential to ensure that the home population was adequately fed as a strong work force was needed to produce the hardware and software to keep both the fighters and the workers strong enough to carry on

The pure military aspect of fighting was analysed and both offensive (tanks, aircraft, munitions etc.) and defensive (anti-gas and anti-submarine) measures were also necessary.

The War was hard and cruel and popular culture has often portrayed it as just a matter of sending helpless men into battle will no chance of survival. Dave’s excellent talk really brought home just how much that was ‘going on behind the scenes’ was in fact the way by which we were eventually able to overcome what was then the strongest and most aggressive military regime in the world.

[Web ed's note: Dave mentioned John Sinton, who was the only person to be awarded a VC and an FRS (Fellow of the Royal Society).  He has a hall of residence named after him at Queen's University Belfast and when I was a student there I had no idea who he was, but have discovered him in more recent times!]

Phillip Kirkland Glazebrook, MP, DSO served in the Cheshire Yeomanry, which was subsequently merged with the King’s Shropshire Light Infantry. He was born on 24 December 1880 to John and Cecilia Glazebrook of Twemlow Hall, Holmes Chapel.

Educated at Eton and New College Oxford, he joined the family firm of Spurrier and Glazebrook (oil merchants). He was elected as MP for Manchester South in 1912.

Having travelled extensively, he had joined the Yeomanry in 1901 and had been promoted to Major in August 1914. His unit initially guarded the Suez Canal and were also stationed at Samalita and El Alamein. In 1917 they merged with the Shropshire Yeomanry and fought at the successful Third battle of Gaza in November of that year.

By 27 November 1917 his unit were at Junction Station, west of Jerusalem, which was defended by the Turks. In March 1918 the unit had a three day trek to Latrun. On 29 March he took two companies to meet up with 25 Bn. Royal Welsh Fusiliers at El Tireh. They took the village but were situated in a hollow, overlooked by the enemy. At daybreak the next day his men took the northern hill. Unfortunately, they were driven off by a strong enemy counter attack and El Tireh became untenable.

On 2 March they moved to Wadi Stour. On 7 March Glazebrook was killed by shellfire, the only fatality that day. He was subsequently awarded the DSO posthumously and is buried in Jerusalem War Cemetery. 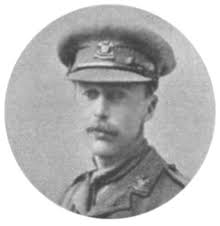