Good evening and welcome to the February meeting, our first in 2018. As you will be aware the January meeting was cancelled due to an oil spillage on Greek Street. I apologise for making a late decision, but I was only informed of the incident late in the afternoon. The police had closed Greek Street at both ends and access was only allowed for residents. In view of the amount of oil on the road surface and the Police’s decision, I decided to cancel the meeting. I tried to email as many people as I could. A few members managed to get to the venue, but having travelled by train to Stockport, I was at the gate to explain the situation. It was unfortunate, but I think to err on the side of safety is always the best course of action.

I am pleased to welcome Dave Rogers to the Branch. The popular concept of the Great War is four years of the infantry crossing No Man’s Land to face a hail of machine gun bullets. However, the war was the first true full scale industrial conflict. Many scientific advances had been made. Man had fulfilled his lifelong wish to be able to soar like the birds.

There was much state of the art especially in engineering and science. The navies of the world embraced the height of achievement with Dreadnoughts and submarines. Pure scientific knowledge was utilised in the development of explosive power and the application of gas against the enemy. As the war progressed the combatants tried to leapfrog the inventions of their enemy. I am sure Dave will enlighten us of the actions of the scientists who subsequently became known as the backroom boys.

The first peace treaty of World War I was signed when the newly declared independent state of Ukraine officially came to terms with the Central Powers at 2 a.m. in Berlin, Germany, on 9th February 1918.

In the treaty, the Central Powers, which included the governments of Austria-Hungary, Bulgaria, Germany and Turkey, formally recognized the independence of Ukraine from Russia. The Central Powers also agreed to provide military assistance and protection from the Bolshevik forces of Russia that were occupying Ukrainian territory. In exchange, the Ukrainian National Republic would provide 100 million tons of food rations to Germany.

Ukraine’s journey toward a period of independence–brief as it proved to be–began shortly after the collapse of the Russian monarchy in March 1917. Led by Premier Vladimir Vinnichenko and War Minister Simon Petlura, Ukrainian political leaders declared the country a republic within Russia. However, after the Bolshevik Revolution, in which the post-monarchy provisional Russian government was overthrown, Vinnichenko proclaimed the complete independence of Ukraine in January 1918.

Bolshevik forces were sent to regain the Ukrainian territory, but after the peace treaty between the Ukraine and the Central Powers was signed, the Russians were forced out by German troops. Within one month of the peace treaty, Russia formally recognized the independence of Ukraine as part of the Treaty of Brest-Litovsk it signed with the Central Powers on March 3, 1918. In 1919, though, during the Russian Civil War, the Soviet Union regained the Ukrainian territory and Ukraine became one of the original republics of the Union of Soviet Socialist Republics. 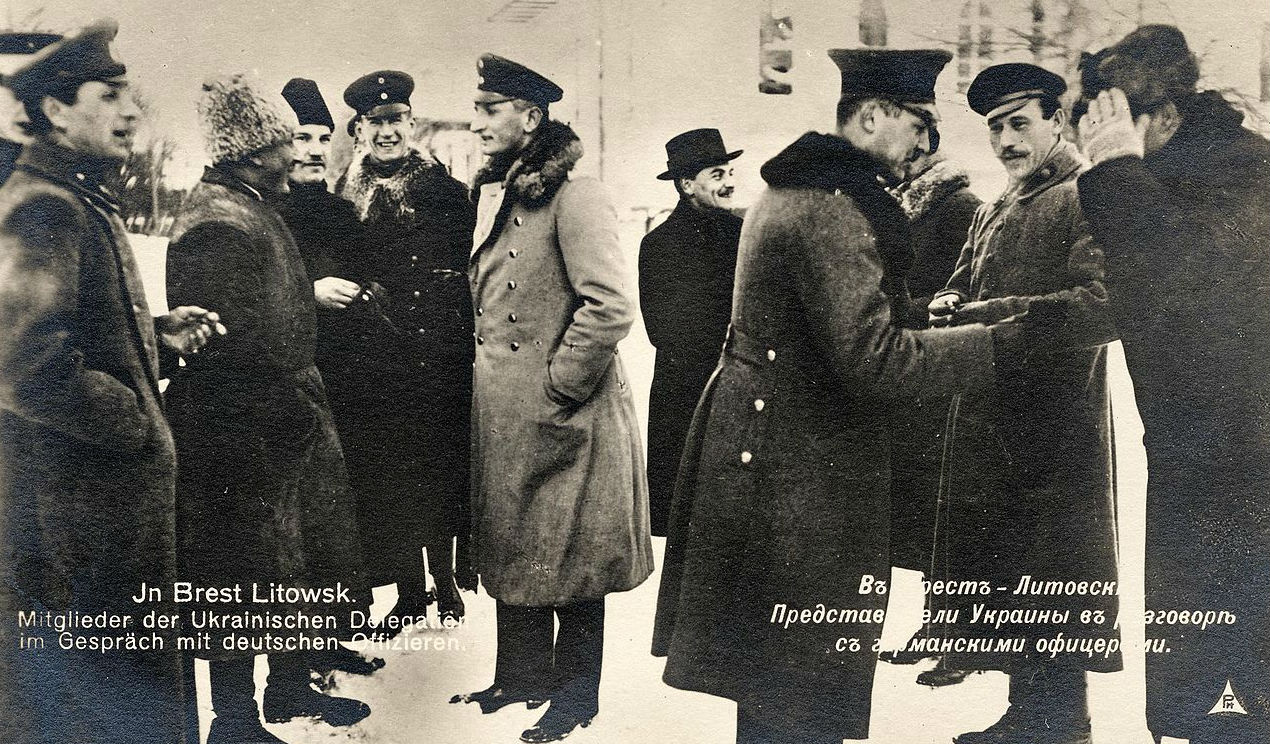 Members of the Ukrainian delegation in conversation with German officers