Welcome to our August meeting and we are pleased once again to have for your enlightenment the very popular speaker on the WFA circuit, Professor John Derry. John’s subject this evening is the German High Seas Fleet: A case of futility.

One of the reasons for growing Anglo-German antagonism before 1914 was the German decision to build a modern battlefleet, with the consequent Anglo-German naval race. Though the German High Seas Fleet was an excellent navy – well-trained officers and men, superbly designed capital ships and outstanding gunnery – it was never able to break the Royal Navy’s command of the North Sea.

Though the 1917 submarine campaign inflicted immense damage on allied and neutral shipping, it also brought the USA into the war, with catastrophic consequences for Germany. Eventually morale in the German fleet collapsed and the sailors mutinied. Following the German defeat in November 1918, the Allies interned the bulk of the High Seas Fleet in Scapa Flow, where it was ultimately scuttled by its crews in June 1919, days before the belligerents signed the Treaty of Versailles.

Why, then, was the High Seas Fleet built? Did it have any coherent strategy? Or was it (as some German generals claimed) a massive diversion of much needed funds and material from the enemy? These are some of the issues which John Derry will address in his talk.

Dr Peter Hodgkinson presented the branch with a detailed and absorbing account of the clearing of the battlefields and clarified some of the most often misinterpreted evidence found in field graves.

CWGC cemeteries are well known to Great War students. The communal grave was well documented in the Press. In one case, there seemed to be a linking of arms of several men and it was suggested some more isolated were officers. This was pure journalistic speculation. Soldiers were routinely buried with their arms across their chest. As time passed and the bodies settled the arms would fall and create this illusion. The unequal spacing in parts could be due to variations in the rate of interment.

In previous conflicts mass graves had been common, but the expansion of modern warfare gave rise to a more formal approach. The American Civil War and subsequent conflicts led to a social desire to give nations’ fallen a permanent resting place annotated with details of its incumbent.

The Great War found Britain unprepared for the number of losses commencing with the early days of the war. In the first two years on the Western Front, both sides had generally settled to a static position pending the discovery of a way to outsmart the overpowering strength of defensive ordnance.

The increasing concern of recording casualties led to SS456 (Aug 1916) indicating how burials should proceed. The soldier’s pay-book and personal belongings with one of the identity discs were to be removed. Boots were to be removed for salvage. The task was very unpopular as many bodies had deteriorated as to be almost unrecognisable. The task continued after the Armistice. Experience of where to dig was necessary- rifles in the ground, partial remains on the surface, rat holes and surface discolouration were indicators.

There were various ways a soldier could be identified. The most common (61.7%) was from the personal id discs. Personal items, especially letters could indicate the soldier. Equipment might be inscribed and AB64 (the paybook) would fulfil this. Some unknown soldiers may have been ascribed to a country or unit by the type of clothing, or regimental badges. Rank shown by pips or stripes might narrow the search.

The efficiency varied from unit to unit- Australians being unreliable and subject to indiscipline. Many soldiers complained of the conditions under which they had to work and of the terrible state of some bodies

A very detailed and well study of an often forgotten past of the conflict. TJ

Ann and I recently visited Newcastle. Whilst there, we were pleased to be able to go for a meal with tonight’s speaker, Professor John Derry.

Our main purpose was to walk the trails of the Great Exhibition of the North, which took up an entire day of our visit. On the final day we visited the Roman fort Segedunum at Wallsend. We then crossed the Tyne by ferry from North Shields to South Shields. The purpose was twofold as Ann’s mother was born there and we visited another Roman fort, Arbeia. 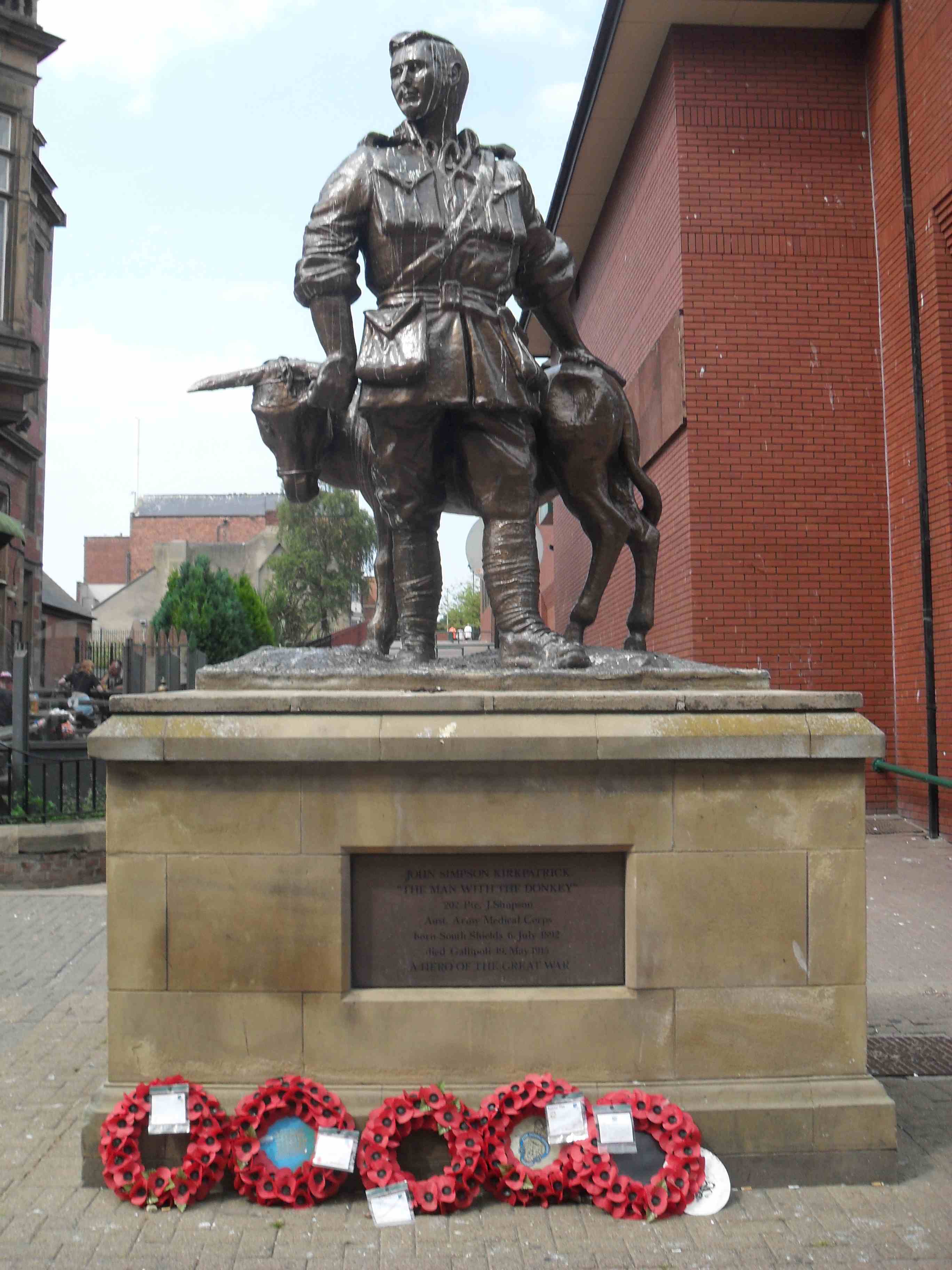 Before returning to Newcastle by Metro, we stopped for something to the town centre for something to eat. It was there that we noticed a new monument to John Simpson Kirkpatrick. He was born in the town, but jumped ship in Australia whilst working as a sailor.

He dropped his surname and joined the Australian Medical Corps and went to Gallipoli. There he became well known by using his donkey to bring back wounded despatches. For this he was Mentioned in Despatches. On 19th May 1915 he was killed by machine gun fire.

After the war he became legendary and as is often the case his stature was enhanced by the media. He used more than one donkey and whilst undoubtedly saving many lives, his donkey was used to bring men from gullies not the beaches. Many more stretcher bearers were killed or wounded in that relatively open area.

Subsequently there was a campaign to obtain a medal or commendation for his actions. This was not accepted as all the other stretcher bearers that received an award were given M-I-D and were rightly considered to be as equally brave.

On 8th August 1918, British and French forces attacked on the First day of the Battle of Amiens. This counter offensive to the final German assault began the period of Allied attacks known as the 100 Days. The element of surprise and lack of bombardment caught the enemy unawares. Their own infantry was neutralised by counter-battery fire and the attack spearheaded by tanks.

However, despite the successes especially in the number of German soldiers who surrendered, the loss of tanks and relative lack of bombing success on bridges by the RAF meant the war was still a going concern.

The battle continued on the 9th.  Semi-open warfare brought about communication problems. Where there was the possibility of wire-tapping, runners or horses were used but were vulnerable to enemy fire. Many of the tanks had broken down or been destroyed

On the 10th, the focus of the Amiens Offensive shifted to the south of the German-held salient. Here, General Georges Humbert’s French Third Army moved toward Montdidier, forcing the Germans to abandon the town and thus permitting the reopening of the Amiens to Paris railroad. The first stage of the offensive was brought to a close in the face of increasing German resistance on the 12th.