Good Evening and welcome to the final meeting of the financial year and as you will be aware, mine as Chairman of the Branch. Please give my successor all your support.

I am pleased to welcome back Dr Jim Beach to the Branch. Jim is well known to us from his days at Salford University. He is currently senior lecture in 20th century history at Northampton University.

I shall still be attending Branch meetings and I hope you enjoy the programme for the remainder of the year.

Dr Jane Orr is a retired GP who had served with the RAMC. She gave the branch an illuminating talk on how the Spanish Flu raged at the end of the Great War.

The name of the illness was more brought about by the need of all the combatants to hide the fact from the enemy that their fighting forces had been struck by the malady. Thus, although Spain was neutral, it too suffered the same effects and the warring factions could deny any effect on their strength.

It was a mutation of two different strains and in the autumn of 1916 in Vienna an outbreak caused 24,000 young adults between 20 to 30 years old to die during the winter of flu like symptoms. They died dying when they bled into their lungs. No tissues were collected so it was not possible to identify it. However, anyone who recovered did not succumb to the later Spanish Flu. The Austrian strain did not spread like wildfire, but some British soldiers in the trenches caught it. It also came back in late 1917.

In March 1918, in Kansas, there was an epidemic of what is now called Swine Flu and became known as the first wave of Spanish Flu. It was within an American army camp and it spread through the camp after some infected pigs that had died were cremated and the smoke drifted over the camp.

People were very ill but after two or three weeks usually felt better. It started with recruits, but then came over the Atlantic with soldiers on the troopships. It spread through the BEF and the German forces. It was very infectious- At the end of June 1918 in one week, 46,275 British soldiers were unable to fight. The weeks either side were similar, but the weekly death rate was generally only about 25.

This strain was beginning to peter out by the end of August. Étaples on the French coast was the major assembly point and hospital base for Britain and her allies. There were people from many different parts of the world and soon after the lessening of what had been known as the first wave, another appeared.

Someone managed to contract both Austrian and Swine flu simultaneously. It mutated into another strain probably in Étaples. It was not as infectious as the earlier wave but was more deadly. About 10% of people who contracted it died. In the first week of November the BEF had 11,300 cases but there were 1000 deaths per week.

Unfortunately it spread. At the end of 1918, when this strain or second wave was beginning to peter out, some Russian soldiers were heading home towards Siberia. This caused previously uninfected populations to succumb to the strain to suffer from it. This was then passed back west as the third wave and got into Europe, the USA and Africa. Australia had introduced quarantine, but by early 1919 with the war over and men coming home, the rules were relaxed and it too suffered.

Overall it was estimated that 3%-5% of the world’s population (50-100 million) died. India actually recorded 17million deaths. Some 750,000 British civilians succumbed to the Flu. The fatal effect was that the virus caused internal bleeding into the lungs whereby the patient died from drowning in his own blood. Research by the Medical Research Centre included experiments on monkeys and mice. Serum from victims was injected into the monkeys. It was hoped a serum could be created, but unfortunately the research was effectively curtailed when the head of the unit, Major Howard Graeme Gibson*, died of the infection in February 1919. (Photo right). 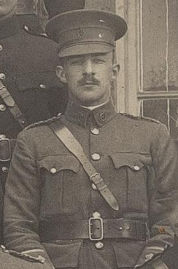 The epidemic had an effect on the cause of the War. Millions of susceptible people were transported in cramped unhygienic conditions all over the world and lived in inadequate accommodation or trenches. On the Western Front resistance was also adversely affected by gas.

The military reaction to the illness was juxtaposition to that of civilians. In the latter one might struggle into work with a mild case and infect other workers, but stay at home in isolation with a severe case. In the war mildly sick soldiers would stay in the trenches and just infect their colleagues. If a soldier contracted a severe case, he would be evacuated down the line, thereby liable to infect everyone on the way from stretcher bearers, drivers, medical staff and wounded soldiers during transportation to and at a base hospital.

Reaction by the military was generally to keep it quiet to avoid the enemy finding out about unit weaknesses. The USA Senate calculated the cost of the fifty thousand troops KIA, but ignored those of the fifty-seven thousand flu victims. The authorities cancelled the draft in October 1918 denying Pershing half the men he needed. Deaths from the illness were not recorded as casualties in records after the war.

The Germans suffered high sick rates. Whereas war fatalities could be left until alter sick men had to be seen to. Ludendorff was prone to complaining about other factors than his abilities when things went wrong. The March Offensive took place in the middle of the flu epidemic and he stated the loss of one and three quarter million flu victims on top of three quarters of a million cost him success. In June 1918 Divisions were some two thousand understrength, with little food and a failed supply chain. Whilst the prime reason was his poor decisions, in the long run it added to the German push for an armistice in November.

After the War the effect of the flu was rarely talked about. All the nations’ forces had suffered much during the conflict and to complain about an illness was in British terms considered ‘not cricket’. In the recent past there have been several similar epidemics across the world. With the ability of ease of travel and thereby cross infection, nations have begun to look back to the Spanish Flu to see what lessons can be learned.