Good evening and welcome to the September meeting.  I am pleased to inform you that I now have a full diary for the 2018 speakers. At present it is not possible to post them on the national website. In the meantime a brief résumé of the speakers and their topics are on this website.

100 Years ago the Second Army was preparing for a continuation of the assault at Ypres and early in the month an attack by 42nd and 61st Division at Hill 35 failed. During early September, Second Army was preparing for another major assault. The halt in the operations was to enable construction of roadways to bring forward artillery and ammunition. Railheads for ammunition supplies were also being built.

Last month we were enlightened by Professor Derry on the land campaign. Tonight I am pleased to welcome back Peter Hart who will be looking at the role of the RFC in the battle. Peter is a regular speaker at the Branch and he has provided us with some of the most interesting accounts of the war. Furthermore, I am deeply indebted to Peter for standing in at very short notice following the illness of the original speaker. I know we are going to be thoroughly entertained.

May I remind you that Stockport War Memorial and Art Gallery will be hosting an exhibition on the history of the Stockport TA building from 12th September until 4th October.

Professor John Derry yet again held a captive audience at the Branch as he gave his reflections on Third Ypres. The battle was particularly remembered for the atrocious weather that occurred during the late summer and autumn of 1917.

The weather was exceptionally bad for the time of year and could not have been foreseen as politicians of the time would have us believe. It meant that the fragile drainage already damaged by excessive shelling was further ruined by the rain. However, the battle was not unique for heavy casualties. The 1944 Normandy campaign had a higher daily rate of attrition and the Stalingrad battle was equally intense. Unfortunately, the perceived lack of success and the underhand political reaction caused 3rd Ypres to be regarded as a failure.

There were good reasons for an assault in 1917. Ypres had been held by the British Army and was the only town of any size not in enemy hands. Germany therefore occupied virtually all of Belgium and the main industrial areas of France. Ypres also protected the channel ports which were vital if Britain was to provide a continuous presence on the Western Front. Ypres had withstood two previous assaults; the last one in 1915 saw the use of gas by the enemy, thereby confirming its intention to stop at nothing for its conquests.

In 1916, Britain was required to help the French who were engaged in a titanic struggle at Verdun. The Somme was not a choice of the British and the battle was fought over non-strategic ground in order to take the pressure off its ally.

Following the end of Verdun, the new French commander Nivelle was able to convince his government that his success there could be replicated on a larger scale at the Aisne. He was also popular with the British politicians, especially Lloyd George. Nivelle was a protestant, his mother was English and he spoke our language fluently. British forces were therefore to attack at Arras.

Unfortunately, the Germans pre-empted him by withdrawing to the Hindenburg line. Nivelle persisted in keeping to his original plan and the failure brought about mutinies. The French soldiers refused to do futile attacks, but were willing to defend their homeland to the end. The inevitable removal of Nivelle meant that any attack on the enemy would have to be carried out by the British.

This was what Haig had anticipated. As well as hoping to protect the channel ports, he was being advised by the Admiralty that the northern coast of Belgium housed the enemy submarine fleet. That was now engaged in an all-out assault on shipping as the USA had declared war on them in April. That Germany held Roulers also gave the enemy a fundamental transport base for northern Europe and its capture would seriously hamper their logistics. Furthermore, shipping losses caused by the undersea vessels were threatening the sustainability of the war in Britain. It was therefore imperative that action was necessary even before the American forces could arrive in sufficient numbers and trained to be an effective fighting force.

The BEF had been learning its lessons. Training now involved all arms co-operation. Haig had long since seen the value of tanks and aircraft, the former still developing and never available in sufficient numbers. Artillery was much improved with the use of the creeping barrage and improved ammunition providing a better scientific support. The Canadians had shown their improved tactics with the capture of Vimy Ridge at Easter. Plumer in charge of Second Army, together with his excellent Chief of Staff Harrington, masterminded the success of Messines Ridge in June. Troops were well trained and shown models of the land over which they would fight.  Staff work was much improved.

Haig’s mistake, notwithstanding the on-going debate about the delay after Messines, was to give control to Gough (5th Army), who had the reputation of a ‘Thruster’. Haig had given Gough a limited aim, but Gough tried to push the attack too vigorously in very poor conditions. This led Haig to replace him with Plumer and  2nd Army. Plumer planned the assaults on the Menin Road, Polygon Wood and Broodseinde.

Although progress was made, the weather began to deteriorate. On 9th October ANZAC units attacked towards Passchendaele. The village was on one of the highest points of the main ridge. The artillery barrage failed, many shells failing to explode in the waterlogged ground. On 13th October the attack was postponed until the weather improved. The weather began to improve and following a substantial bombardment the Canadians attacked on 26th October. Unfortunately the rain restarted.

Third Ypres became the focus in future years of the anti-war brigade as an example of the poor performance of the British Army and its commanders. Lloyd George tried to indicate that Haig had authorised the assault despite the bad weather. Haig did make mistakes, After Messines he handed the assault to Gough and his Fifth Army. He was regarded as a thruster. Plumer had asked for a delay to refit and recover, but Haig thought Gough could push on. As it happened Gough also requested a delay to prepare, which turned out to be longer than that proposed by Plumer.

Much has been made of the continuation of the attacks in bad weather. Lloyd George cited this, but in fact the weather was abnormally wet for the time of year. Unfortunately, although many of the attacks commenced in relatively acceptable conditions, the weather frequently suffered a bad spell. Furthermore as the terrain was over a series of ridges, it would have been impossible and suicidal to dig in nearer to the enemy highpoint and being overlooked by their artillery. Passchendale had to be taken and secured to create a defensible line.

British casualties were in the region of 370,000 and it is estimated the Germans suffered a similar number. Although the front had been pushed out, Roulers had not been taken and the Flemish coast was still in enemy hands.  Although Russia was now out of the war, it did not offset the prospect of a much greater influx of USA soldiers in 1918. Germany was short of reinforcements and the British were required to reduce the size of brigades from 12 to 9 battalions. However, Lloyd George kept fighting reinforcements from Haig by including a huge number of non-combatants in the figures he presented to Parliament. Fundamentally, the British assault disguised the effect of the mutinies in the French Army. Furthermore, the dire straits in which Germany found itself forced Ludendorff to embark on a reckless gamble in the Spring Offensive, which was ultimately to prove disastrous.

Yet another first class and entertaining talk by Professor Derry. Ed

Ecaterina Teodoroiu (1894-1917) was a Romanian soldier who fought against German forces during the First World War.

Teodoroiu spent her teenage years as a member of the Romanian Scouts and studied at the Girl's School in Budapest. She planned to become a school teacher, however when Romania entered World War I on the Allied side in 1916 she instead decided to serve as a nurse with the Scouts. Inspired by the patriotism of the wounded soldiers that she treated and the death of her brother in action, she decided to enlist as a soldier. 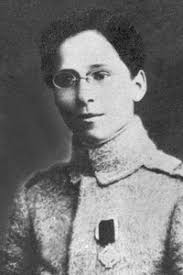 Although she had to apply several times before the Romanian army eventually accepted her, Teodoroiu saw combat in October 1916 at the first Battle of Jiu as part of General Ion Dragalina's 1st Army. Some accounts say that Teodoroiu played a key part in this battle by rallying soldiers defending a bridge. Despite initially repulsing the German offensive, the 1st Army was forced back and during the retreat Teodoroiu was captured. However she managed to escape, killing at least two German soldiers in the process while sustaining only a leg wound in return.

She continued to serve in the army, however in November 1916 she was seriously wounded by a mortar strike and had to be hospitalised. She received the Military Virtue Medal, 1st Class, for her bravery and on her return to duty was promoted to Sublocotenent (Second Lieutenant) and given command of a 25-man platoon.

Teodoroiu was killed on September 3rd 1917, during the Battle of Marasesti, the last battle fought between Romania and Germany in the war. She was hit in the chest by a burst of machine gun fire as she led her platoon against a unit of entrenched Germans. Her last words as she died were to call out "Forward, men, I'm still with you!".

Teodoroiu was buried in Targu Jiu where her grave is honoured by a monument. She is regarded as a heroine of Romania.