Good evening and welcome to the October meeting. Tonight we welcome Dr. Phylomena Badsey to the Branch. As well as being a speaker on the nursing aspects on the War, she is also responsible for higher education within the WFA.

100 hundred years ago the BEF had just embarked on the first assault to take the village of Passchendaele, the name and reputation of which has often been transposed as the popular title for Third Ypres. I am sure Branch members will be aware of the progress (or lack of it) and weather conditions for which the battle is synonymous.

Immediately before our meeting next month a short ceremony will be held to reflect the Remembrance weekend.

Peter Hart gave the branch an entertaining talk on the role of the RFA at Third Ypres. Previously the Corps had been out classed at Arras in what became known as ‘Bloody April’.

Later that year the RFC had evolved and awaited the challenge of the intended breakout from Ypres following the Messines Ridge mine assault on 7th June. The Corps had evolved and was determined to take on the German fighters.

The Sopworth Camel had a rotary engine with the cylinders rotating round a static crankshaft. Whilst it was a powerful engine, due to its design it had a heavy torque to the left. It had two machine guns. The SE5 had one Vickers gun on the fuselage and a Lewis gun on the top wing. It handled well in a dive.

The RFC also had numerical superioritywith 750 aircraft (330 Scouts {Fighters}) to the Germans’ 600/200.  This caused the Germans to increase their formation size to offset their lack of numbers. The most well-known enemy unit was Richtofen’s Flying Circus. Following their leader’s example of painting his aircraft red, his comrades painted their craft in various colours. The RFC tended to lose more craft as they pushed over enemy lines whilst the Germans rarely entered British airspace. The British aim was to deny the enemy gain information of the overall British plan.

Unfortunately, the battle frequently took part in bad (flying) weather. As the battle progressed the RFC sent information to the artillery on the positions of enemy guns and using a ‘clock’ system could direct RFA fire onto enemy reinforcements. Some bombing raids using 25lb bombs were carried out against enemy airfields and ‘strafing’ on infantry units became more prevalent.

Dogfights became more common and ‘aces’ emerged. On 23 September James McCudden shot down the ace Voss who had 49 kills to his name. (McCudden was killed in accident in July 1918).

Our thanks to Peter for standing in at short notice and as usual, giving a lively account of The RFC at 3rd Ypres. WFA members can read a fuller account by Peter in the June/July 2017 Stand To issue to remember Passchendaele. Ed

Ann and I recently visited the IWM North to see the Wyndham Lewis exhibition.

Lewis, born in Canada, was a painter of exceptional talent, but very intense. He was involved with the Vorticists at the turn of the last century.

He served as an artillery officer in the Great War. His painting A Battery Shelled is probably his most famous work. It shows observation officers watching their men being attacked by enemy gunfire (see below). It is a dramatic piece of work and is included in the exhibition.

I can recommend a visit to see the exhibition which is on until the end of the year. 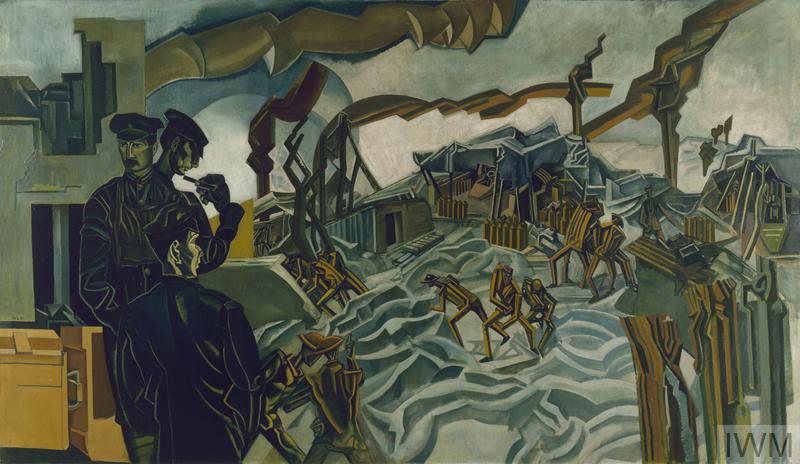 Gary Trown, the WFA Branch Co-ordinator has sent me the following details of the Branch Chairmans’ meeting to held next February (see below).  Unfortunately, this is the same date as Ann’s birthday and we have already made alternative arrangements.  It is a very good opportunity to meet other members and see how they run their branches.

I should be very grateful if a member could volunteer to attend on my behalf. Please let me know as soon as possible if you are interested”.

*Chairmen can be of either gender!

We will cover reasonable travel costs + Bed , Breakfast and Dinner for 1 delegate from each Branch. This is a chance to exchange ideas and share good practice.

Can you confirm the name of your delegate asap