Good evening and welcome to the May meeting. I attended the WFA AGM in Newcastle upon Tyne last week. There were no major issues and the details should be available soon. We were shown the pre-launch version of the new WFA website. It should be more easily accessible for members and the general public. It should shortly be available.

Professor John Derry lectured on the topic that he will bring to our Branch in August. It goes without saying that the capacity audience will be well entertained. I have now provisionally covered all the dates for 2018, subject to a couple of confirmations. Those definitely confirmed have a brief résumé on this website. I will put them on the new national WFA website when it becomes active.

I am pleased to welcome Geoff Caulton to the Branch. We are all familiar with Tommies’ khaki serge.  However, Germany also had to adapt soldiers’ equipment and clothing to this novel form of warfare. Not least of all was the need for protection from shrapnel and other flying objects. I look forward to being educated on the subject.

We need to take action if we wish ‘Up the Line’ to continue. This has been produced at cost by Ralph Lomas. However, it takes up valuable commercial time. We should be able to continue to produce UTL.  There is a Microsoft programme which would enable the provisional copy to be sent to Ralph for him to run off. In view of my other commitments I cannot take this on. I am therefore asking for someone to produce the monthly copy. I am sure Ralph will be able to give advice.

Arthur Aston looked at the career of Horace Lockwood Smith-Dorrien (SD), an experienced officer who fell foul of the British Commander Sir John French at the Second Battle of Ypres in 1915.

SD was born at Haresfoot, Berkhampstead on 26th May 1858. He was educated at Harrow and joined the 95th Regiment of Foot (Later Sherwood Foresters). He saw service in Africa during the Zulu wars and was at Isandlwana. SD was in command of a supply train and survived the massacre, having to hold on to a horse in the river.

SD served in Egypt, India, Africa and Sudan. He was awarded the DSO in 1886 after capturing nine Arab supply boats. In late 1899 he was in South Africa during the Second Boer War. He commanded a division and was mentioned three times in despatches. (Photo is of him and his son Grenfell). 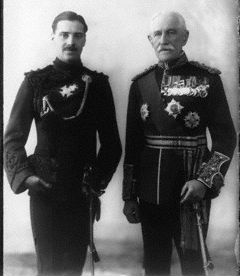 In 1901 he returned to India, becoming Adjutant-General. He became friends with Kitchener. In December 1907 he was made GOC of Aldershot Command. SD removed the pickets who toured the town looking for misbehaving troops. Instead, he held them to their professional honour. He improved their barracks and developed spots and leisure facilities. This rankled with his predecessor French. However, it was SD’s change of the cavalry’s role to dismounted troops as he envisaged the forthcoming conflict which annoyed French. French was convinced of the value of the ‘Arm Blanche’ in the traditional style, despite growing evidence of this being outdated.

In August 1914, The BEF crossed to France. Haig commanded I Corps, whilst II Corps was led by Grierson. Unfortunately, on 17th August Grierson died of a heart attack. French asked Kitchener for Plumer as replacement, but he was sent SD, Kitchener believing that he would be more critical of French’s decisions when he disagreed with them. Unfortunately II Corps had not been adequately provided with an experienced Staff Command and the organisation struggled to be effective. French was also enraged when SD asked him if he would allow him to report to the King who had asked SD for updates. By now French was intent on dealing with SD as soon as possible.

On 23rd and 26th August, II Corps took the brunt of the enemy attack at Mons and Le Cateau. Henry Wilson was constantly giving French substantially incorrectly low estimates on the facing enemy forces. After the former battle II Corps was separated from I Corps and SD took the decision to fight at the Le Cateau, despite being told to continue the retreat.  SD realised that his Corps was the sole British unit fighting the enemy. Reports from his field commanders were that the men were still arriving late in the day. In particular, the mounted units would have been unable to regroup and would have been overrun had they continued their flight. Using the prerogative of a commander on the spot, he decided to give battle.  Whilst II Corps suffered casualties, they were able to reform. French at this point praised SD for his action.

SD led his men on the retreat. The BEF and French Army eventually halted the enemy on the Marne. Subsequently the BEF moved to Belgium where 1st Ypres determined the salient for the next three years. As the BEF expanded, SD became Commander of 2nd Army and faced another assault at 2nd Ypres when the Germans used gas. The overwhelming strength of the enemy caused SD to suggest to French that the BEF should withdraw to a more sustainable line.

By now French was looking for a scapegoat for his own failings and began to criticise SD’s ability. Ultimately French removed SD and replaced him with Plumer. Plumer suggested the same action as SD. This time French agreed. SD returned to England and was subsequently appointed GOC East Africa in late 1915.  Unfortunately he developed pneumonia on route and returned home to see the war out as Lieutenant of the Tower of London.  He then spent nearly 5 years as Governor of Gibraltar.

French published his book ‘1914’ in 1919. He castigated SD vigorously, but his inaccuracies were obvious to many. Unfortunately as a serving soldier, SD was unable to legal action against him. However, SD showed unbelievable magnanimity by being one of the first to volunteer as a pall bearer at French’s funeral in 1925. 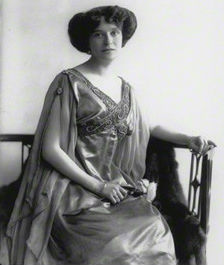 SD died on 12th August 1930 following a car crash in which he was a passenger near Chippenham.

SD married Olive Crofton Schneider in 1902 and they had three sons. (Her photo is right).

A very detailed and entertaining account by Arthur of the career of my favourite officer of the war. Ed.

On the first day of the battle, 7 May, one Australian brigade on the right flank was unable to reach the German first line, and the British obtained only a foothold on the southern edge of Bullecourt. However, the main Australian attack was successful in capturing the same German trenches the Australian 4th Division had been ejected from on 11 April.

The battle continued for two weeks, the Australians and British committing four more divisions (the Australian 1st and 5th Divisions, and the 7th and 58th British Divisions). The Germans, also reinforced, made numerous unsuccessful counterattacks. By 17 May the Germans admitted defeat by ceasing attempts to recover their lost ground. Of 150,000 men from both sides who fought at Second Bullecourt, some 18,000 British and Australians, and 11,000 Germans, were killed or wounded in battle. 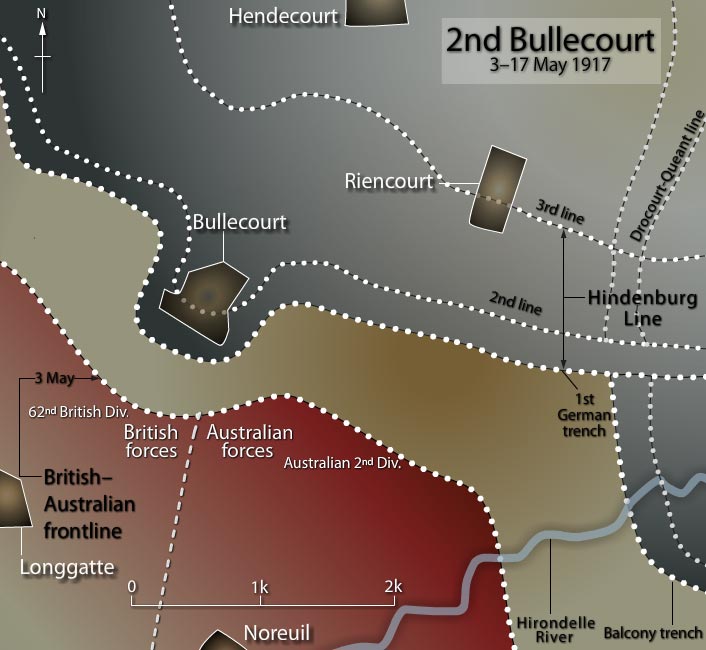