Good evening and welcome to the final meeting of 2017. This centennial year saw reflections on a continual battle on the fields of Europe, the Eastern Front and latterly in Italy. It would see two major powers take diametrically opposed actions.

On the allied side the American Eagle finally lost patience with the unconditional submarine warfare of Imperial Germany, whereas the Russian Bear ultimately withdrew from the conflict as it removed its regal rulers.

In the west despite the French and British military emphasising that it was here that was the only place that a successful campaign could end the war successfully against the Germans, they were thwarted by the scheming of the politicians, especially in Westminster.

Unfortunately, the French were still coming to terms with the disobedience and unrest in their army caused by the failure of the ill-conceived Nivelle campaign. This caused the BEF take over more trench lineage, despite being denied sufficient replacements by the hierarchy of the British Government.

The debate over the progression, or lack of it at Third Ypres, continues to this day. Whilst military mistakes were made, at no time did the nation’s rulers step in to halt the advance. The Belgian assault suffered in that the deterioration of the weather ultimately coincided with the BEF having advanced beyond an initial high point but not far enough to reach the next vantage position. If the village that usually bears the name for the whole battle could not be taken the Allies would be stranded and overlooked from that relative high point.

Our speaker tonight is Mile O’Brien. Mike has the ability to produce cameos gems on some of the unusual aspects of the war. I am sure there will be another one tonight.

At this time of year I must thank all those who have weighed in at the meetings. Phil Hamer has stood in when I was unable to make it and the ladies have always been busy with the raffle. I am grateful that Andy McVeety has agreed to take on the role of treasurer. I would like to give Trevor Adams a special thank you for providing us with a first class web site. Trevor has many other commitments and I appreciate the effort he puts in for us.

I would also like to thank our hosts- Alan Kennedy and his crew and Captain Lesley Oldham for the use of their facilities. Naturally, I am grateful to Ann for her patience. Thank you to you for your support and look forward to what will be the centennial year of the victory, obtained not without a few scares along the way.

After the meeting we will have the traditional trench stew hot pot supper.

Mike Stedman gave the Branch a detailed account of the actions at Thiepval on 1st July 1916.

The British line made a sharp turn to the south and the front line was just below the village of Thiepval. The British positions had the advantage of woodland to hide vital elements of the impending attack, but the enemy positions occupied the edge of a ridge which gave them excellent views of the Ancre valley. The 8th, 32nd, 36th and 29th Divisions held this sector mainly against the German 26th Reserve Division. The German division was commanded by the competent General Franz Von Soden

The 36th Division (New Army) was mainly manned by Ulster Protestants opposed to Home Rule (but see the footnote for expansion on this point of who was there). The enemy was part of the German 2nd Army commanded by von Bulow. It was proactive and had good officers. It had well prepared defences including fortified villages. The enemy front line was extensive and the attack would have to pass over five or six lines of fully armed trenches with added fortifications such as Schwarben Redoubt, Nord Werk and the Wonder Work. Many of their trenches were connected through underground cellars. A large number of machine gun positions were provided from which guns could be moved to and could be directed in multiple directions as required.

Thiepval shielded the ridge behind it, this being an essential gain for the British if they were to progress along the area towards Bapaume. Behind the village was the fortified Mouquet Farm. It was linked to Schwarben Redoubt and overlooked the ridge behind Thiepval. Its capture was essential if the BEF was to succeed.

The 36th Irish had a daunting task. Their attack was in a semi-circle aspect.as the front lines crossed the Ancre, they swung south where the Germans had established themselves on the Thiepval Ridge. (The Germans inevitably dug in on high ground during their retreat of 1914. Being on enemy land they could defend from a position of strength against the Allies whose aim was to remove the invader from French and Belgium soil).

At the northern end of the line the Ulsters initially did well. Men had crept into no man’s land and the artillery barrage was successful. Units manged to penetrate the Schwarben Redoubt. Unfortunately, as the day wore on heavy fire prevented reinforcements from backing up the first wave. Eventually the forward units ran out of ammunition and supplies and the survivors drifted back to their own lines.

The men to the south, crossing west to east had to advance up a clear slope to the Thiepval ridge and suffered heavy casualties. The German positions had up to six lines of trenches to be breached. All were able to provide mutual fire support and British casualties were heavy-some 5100..

The 32nd Division held the line to the south of 36th Division. The Glasgow Commercials advanced into no man's land at 7:23 a.m., until they were 30–40 yards from the German front line. At zero hour, they rushed the trench before the garrison could react and captured the Leipzig Redoubt. Attempts to exploit the success were met by machine-gun fire from the Wundtwerk (Wonderwork) and the Scots were not able to advance further. The capture of the redoubt was the only permanent success in the northern sector. The 49th Division in reserve, went forward during mid-morning in support of the 32nd Division, although the commander, Major-General Rycroft, had suggested that it would have more effect by reinforcing the initial success of the 36th Division.

The 146th Brigade attacked Thiepval through the 32nd Division area and then the 49th Division was ordered to send any uncommitted battalions direct to the 36th Division. The area was defended by two battalions of German Reserve Infantry Regiment 99, whose machine-gun posts survived the bombardment and which began firing as soon as the British attacked. The 3rd Company, German Infantry Regiment 180 was annihilated in hand-to-hand fighting at Leipzig Redoubt. The garrison of Thiepval emerged from the shelters and cellars of the village before the British arrived and cut down the attackers with small-arms fire, leaving a "wall of dead" in front of the position. The 32nd Division lost 3,949 casualties and the 49th Division 590 casualties.

As in most of the northern sector, heavy casualties were sustained for relatively little reward. The battle would carry on into the autumn.

Thanks to Mike for an in depth study of the heartland of the 1st July assault. Ed

Web Ed footnote: Perhaps just to expand on the background of these events (and it is part of our family history, as my grandfather was fatally wounded at Thiepval), it is worth mentioning that the 36th Ulster Divn had indeed been "Carson's Army" in April 1914.  However, it subsequently became part of the British army and by 1915 had artillery from Lambeth in South London, and many professional English officers (to replace those sacked by General Oliver Nugent when he became divisional commander in 1915) including, for example, Lt Garner from Liverpool who survived the war and whose ID bracelet was found at Thiepval three years ago. In 1915-16, there had been a recruiting drive in Ulster, resulting in new recruits both Catholic and Protestant joining this, their local division, including my grandfather and my great uncle. In the post-WWI political events in Ireland, it often suited unionist politicians to ignore the contribution of the Catholics, the English and the other "non-orange" soldiers, a situation which has been rectified in recent years, at least to some extent.

The Battle of Jerusalem occurred during the British Empire's "Jerusalem Operations" against the Ottoman Empire, when fighting for the city developed from 17 November, continuing after the surrender until 30 December 1917, to secure the final objective of the Southern Palestine Offensive during the Sinai and Palestine Campaign of World War I. Before Jerusalem could be secured, two battles were fought at the Judean Hills to the north and east of the Hebron–Junction Station line.

These were the Battle of Nebi Samwill from 17 to 24 November and the Defence of Jerusalem from 26 to 30 December 1917. These battles were successfully fought by the British Empire's XX Corps, XXI Corps and the Desert Mounted Corps against strong opposition from the Yildirim Army Group's Seventh Army in the Judean Hills and the Eighth Army north of Jaffa on the Mediterranean coast.

The loss of Jaffa and Jerusalem, together with the loss of 50 miles (80 km) of territory during the Egyptian Expeditionary Force (EEF) advance from Gaza, after the capture of Beersheba, Gaza, Hareira and Sheria, Tel el Khuweilfe and the Battle of Mughar Ridge, constituted a grave setback for the Ottoman Army and the Ottoman Empire.

As a result of these victories, British Empire forces captured Jerusalem and established a new strategically strong fortified line. This line ran from well to the north of Jaffa on the maritime plain, across the Judean Hills to Bireh north of Jerusalem, and continued eastwards of the Mount of Olives. With the capture of the road from Beersheba to Jerusalem via Hebron and Bethlehem, together with substantial Ottoman territory south of Jerusalem, the city was secured.

On 11 December, General Edmund Allenby entered the Old City on foot through the Jaffa Gate instead of horse or vehicles to show respect for the holy city. He was the first Christian in many centuries to control Jerusalem, a city held holy by three great religions. This was appreciated by the local population when compared to the Kaiser’s entrance on horseback in 1898. It also redeemed Allenby’s standing after he had been removed from his Western Front command in early 1917.

Lloyd George called the capture as "a Christmas present for the British people". The battle was a great morale boost for the British Empire following the closure of the costly Third Ypres campaign. 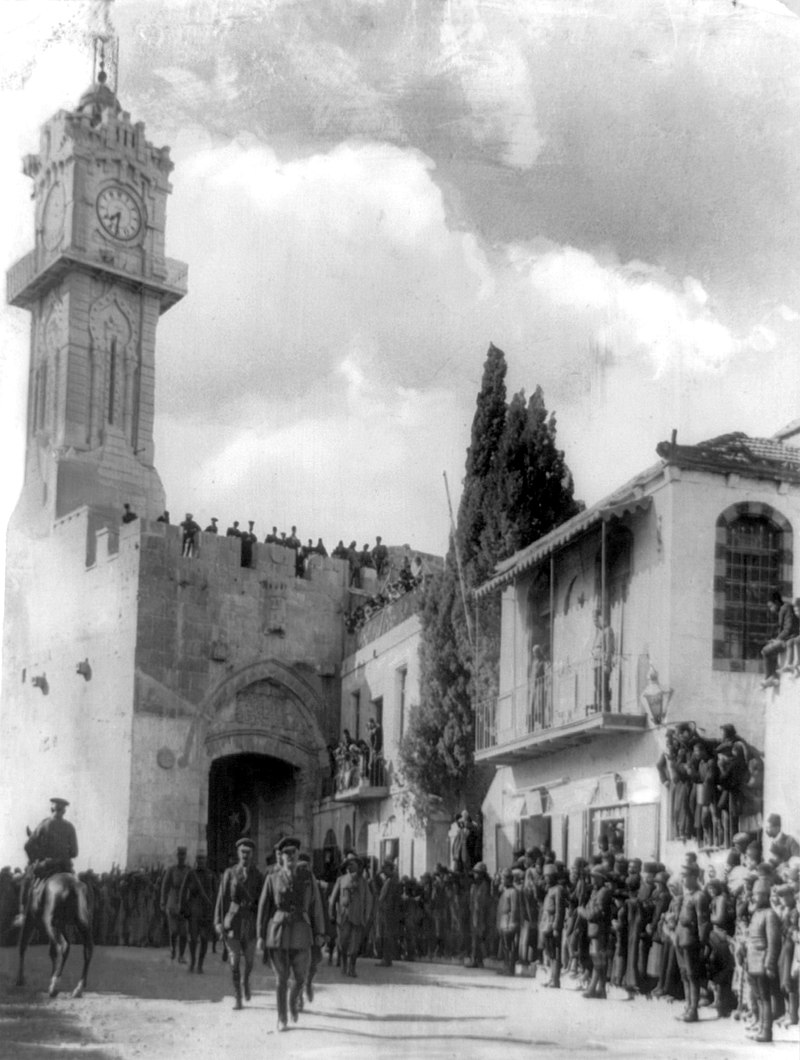