Good Evening and welcome to the August meeting. We have received a thank you acknowledgement from Colin Wagstaff, Chairman of the WFA, for our donation towards a board at the Butte De Warlencourt. This will mean that our Branch will be exclusively mentioned on one of the notice boards to be erected on the site.

I am pleased to be able to welcome back the Branch’s favourite speaker, Professor John Derry. Our regular audience will be anticipating another enthralling talk, this time on 3rd Ypres. Following cross references from members who also belong to other groups, John now makes at least three other visits to the locality to talk to the WI and church organisations. As usual, after John speaks, he is invited to another group represented in the audience. I do not need to say you will be fully enlightened by the end of the evening.

Kate Wills gave an entertaining account of how music and musicians were affected by the outbreak of the war.

There were many German immigrants and their descendants then living in the country. Gustav Holst was from a German background. He tried to enlist in the British army, but was deemed unfit. He was involved with the YMCA orchestra in Salonika during the demobilisation period.

Basil Cameron Hindenberg was the son of a German immigrant family. After dropping the German name he was to eventually become involved in organising the Prom concerts after the war.

Lena Ashwell was the daughter of a naval commander and was born on board ship. She studied music, but later became an actress. She was married but divorced after an affair with an actor, before again marrying this time to a Royal obstetrician. She became involved with the YWCA and despite difficulties took an all-male group to entertain the troops.

When World War I broke out, the composer Elgar signed up as a special constable in the local police and later joined the Hampstead Volunteer Reserve of the army. He composed patriotic works. The earlier Land of Hope and Glory, already popular, became still more so.

Fritz Kreisler was born in Vienna and became a famous violin virtuoso. He briefly served in the Austrian army, and was discharged after being wounded.  He moved to the USA. He retuned there after the outbreak of the Second World War and took citizenship.

The most famous British song from the war was It’s a long way to Tipperary written by Jack Judge. It was said to have been written as a bet when he was performing in Stalybridge. Judge’s grandparents were from Tipperary and the song was soon adopted by the Tommies. There is a sculpture of the composer in Stalybridge.

Kate provided many other examples of various musicians from both sides who either wrote or performed in relation to the conflict.

A really fascinating in depth account of the impact of the war on the music scene. Ed

The Capture of Westhoek (10 August 1917) took place on the Gheluvelt Plateau during the Third Battle of Ypres  (31 July–10 November1917). British Fifth Army attacked the Gheluvelt Plateau at the Battle of Pilckem Ridge (31 July – 2 August), but the German 4th Army had fortified its positions in the Ypres Salient since the Second Battle of Ypres. The British reached the first objective in the south and the second objective on the northern flank, but lost some ground to German counter-attacks. Another attack on 2 August was postponed due to torrential rain from the afternoon of 31 July until 5 August.

The ground had been churned by artillery-fire and became a sea of mud, flooded shell craters, fallen trees and barbed wire. After several postponements the next attack was set for 10 August. British artillery fired a preparatory bombardment from Polygon Wood to Langemarck for the main attack on 14 August, but the German guns concentrated on the Gheluvelt Plateau. British counter-battery artillery was hampered by low cloud and rain, which made air observation extremely difficult and shells were wasted on empty gun emplacements. The fresh 25th and 18th divisions took over by 4 August, but the front-line troops had to be relieved every 48 hours, which exhausted all of the infantry by 10 August. The German 52nd Reserve Division had not been relieved after 31 July and the 54th Division took over in the north by 4 August and were also exhausted by 10 August. 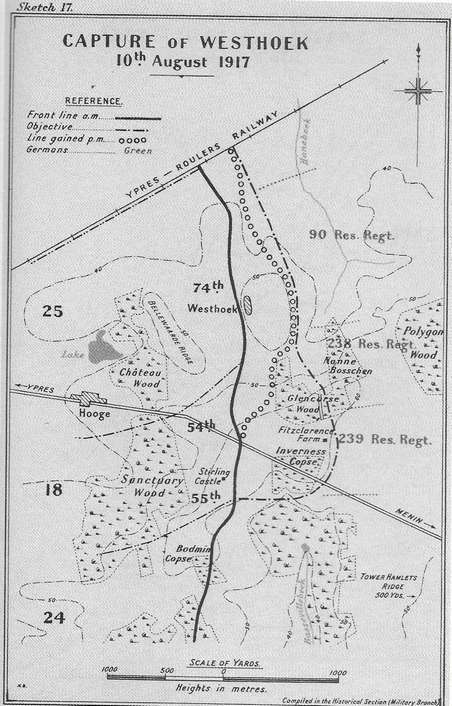 The 18th Division attacked on the right and some troops quickly reached their objectives but German artillery began a SOS Barrage at 6.00 a.m., from Stirling Castle to Westhoek. This isolated the foremost infantry in the open north of Inverness Copse and in Glencorse Wood. German troops began immediate counter-attacks and around 7:00 p.m., fresh German infantry advanced behind a smokescreen. By nightfall the copse and all but the north-west corner of Glencorse Wood had been recaptured. The 74th Brigade of the 25th Division on the left flank advanced quickly and reached its objectives by 5:30 a.m. The Germans in Westhoek were rushed, but on the right flank, sniping and attacks by German aircraft caused an increasing number of casualties.

The 25th Division held its gains around Westhoek but lost 158 men killed, 1,033 wounded and more than 100 missing. The defeat of the 18th Division at Inverness Copse, Fitzclarence Farm and Glencorse Wood allowed German snipers and machine-gunners to fire into the 25th Division area, particularly on the right flank. The Germans counter-attacked several times and on into the night, but communication by SOS rockets, daylight lamps, carrier pigeons and runners, enabled the British artillery accurately to bombard German troops in their counter-attack assembly positions. The appalling weather and costly defeats began a slump in British infantry morale; excessive casualties and the replacement shortage concerned the German commanders.

On July 31, 1917, 600 local men and 20 officers went over the top in driving rain near Ypres, Belgium. The push was part of a 20-mile wide offensive designed to break through enemy lines and target German submarines.

It was to be the worst day of the entire war for Stockport’s men.

Alan Kennedy, Chair of the Cheshire Regiment’s Stockport Association, visits the battlefield each summer with other members.

"These lads were weekend warriors," he says. "They were pals, they lived in the same street, went to the same schools, attended the same youth clubs and were told ‘it‘ll be done by Christmas’.

"So they went off singing and dancing to absolute attrition.

"They died through heavy artillery, and the fact the water tables had been destroyed - so as they were hit they sank into the mud.

"If they weren’t hit and killed they drowned."

Stockport’s soldiers took four hours to march three miles through the mud, and when they reached their target - exactly on time - just 57 men and two officers were still standing. More than 100 soldiers were dead, and hundreds more lay wounded on the battlefield.

For those left behind at home, the loss of so many men from such a small area was devastating.

Local war historian John Hartley, who has been researching the local men who died in the world wars, is investigating the true impact of the war on Stockport - and believes news travelled fast.

"It was Stockport’s worst day of the war, and people in the town would have known very quickly," he says. "There wasn‘t the restriction on reporting that surrounds military conflicts now.

"The men lived very close to the Armoury on Greek St - they worked in the cotton mills and hat works that surrounded it. It was a very close community of people.

He adds: "That must have had a terrible impact of grief in this small area of terraced houses in the town centre. There are stories there to be told."

From the Manchester Evening News

There are two entries in the Official History for that day.

Extract from the Official History 1917: 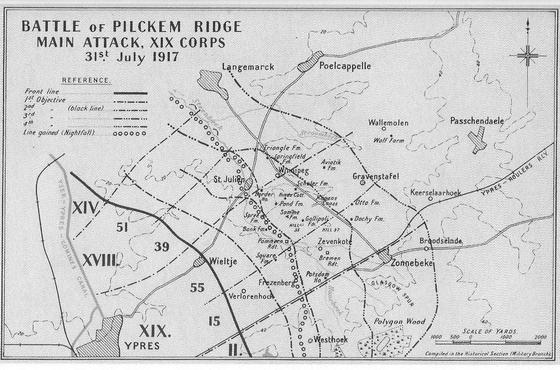 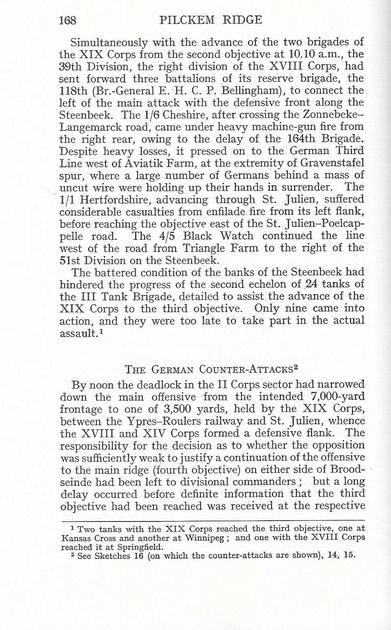 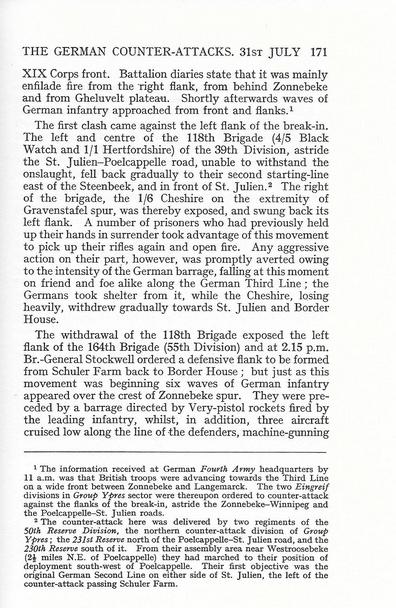 On Sunday 6th August, Ann and I represented the WFA to commemorate the Battle of St Julien (31st July 1917). The forefathers of our hosts at the TA who were 6 Battalion Cheshire Regiment attacked on the opening day of Third Ypres. It became known as Stockport’s worst day.

The well attended service was led by Canon Elaine Chegwin Hall and the Sermon was given by Rt. Revd. Libby Lane, Bishop of Stockport. Afterwards we joined the dignitaries and guests at the Armoury for light refreshments. 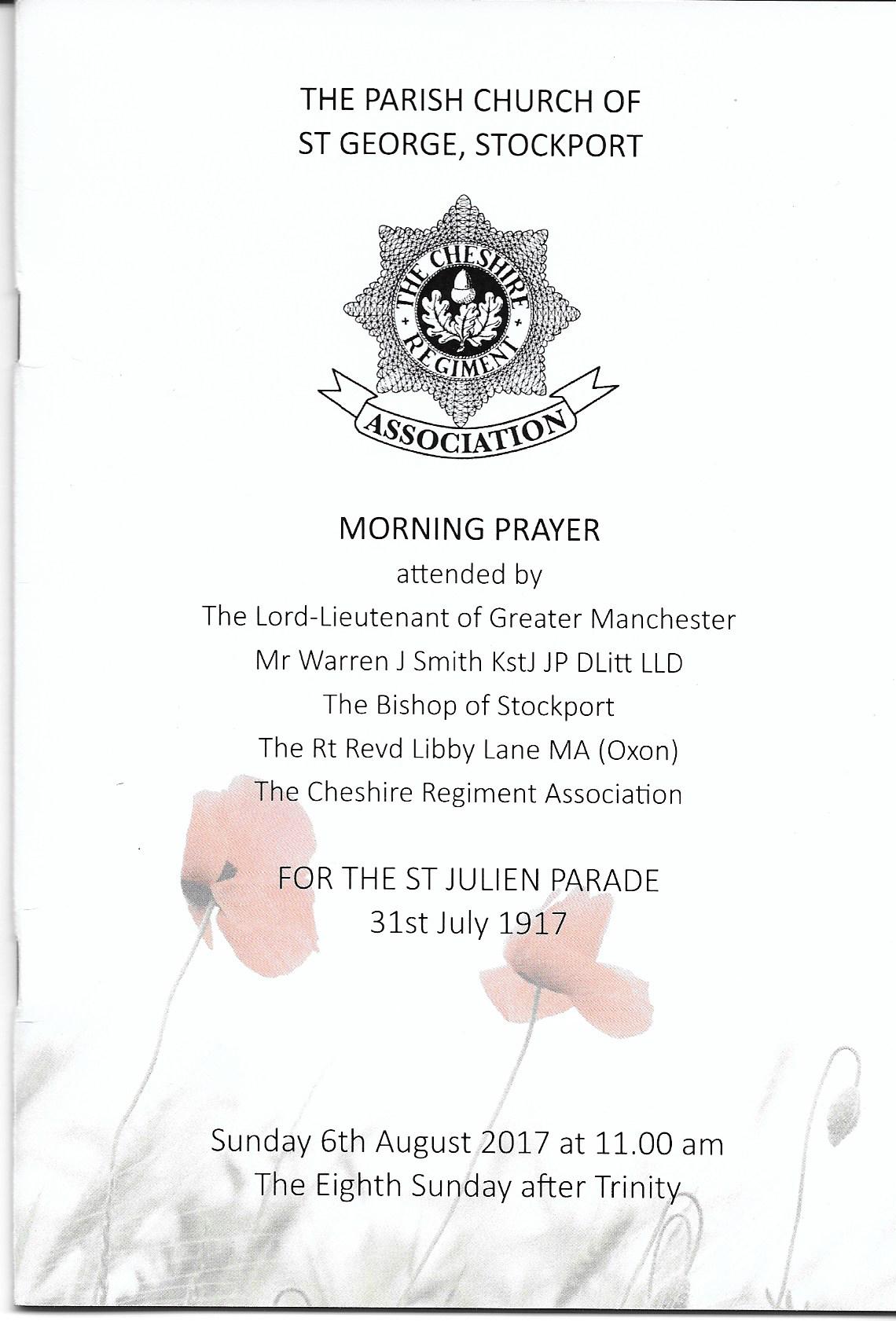