Good evening and welcome to the October meeting. I am pleased to welcome Rob Thompson back to the Branch. Rob’s talks have always been interesting and informative, but also on the general logistic aspect to the war which is often overlooked.

Tonight’s talk is a prime example of a subject that even regular listeners may have little knowledge. Many people can relate fairly readily to battalions and divisions, usually because of their association with a particular town, region or body of men. However, the Brigade often appears as a somewhat iniquitous structure. Its composition of various battalions could sometimes appear nebulous.  Nevertheless, in battle its staff had a difficult task. I am sure Rob, in his own inimitable style, will treat us to a comprehensive analysis of its working.

Although speaker Mike Coyle’s talk was primarily based on memorials from his home town of Blackpool and the surrounding areas, the issues raised concerning the vulnerability of war memorials are applicable to the country as a whole.

Like many Great War students, it was the fate of a personal relative that triggered his interest. His great uncle had been killed at Arras in 1917, but had hitherto been unknown to the family. Mike discovered that his uncle appeared on six memorials.

A war memorial commemorates any conflict in which men or women were killed.  Memorials can take various forms and are not restricted to a plaque or column usually containing a list of the fallen.

Prior to the Boer War soldiers lost were forgotten, but since the Great War they have become part of not only our remembrance, but also our heritage. Unfortunately as there is no central body responsible for their safekeeping or for their recording, over the passage of time many have been lost. It is estimated that 3,100 war memorials have been lost. This figure only includes those that were known to have been in existence. There may be many which were never recorded which have also gone.

Mike illustrated his talk with a number of case studies. He had discovered many memorials hidden away, some under floorboards of buildings and others being held by people for the possibility of selling them on at a profit.

Some of the cases were heart-breaking with pictures of memorials broken or used inappropriately as a ‘fashion statement’ or collectable.

This was a sombre reminder of the danger to the history of those who made the ultimate sacrifice for us and it is essential that we ensure their sacred nature remains intact. Terry

On 14th October 1916, the Cambridgeshire Regiment, known as “The Territorial Fen Tigers”, finally captured the formidable German stronghold known as the Schwaben Redoubt. After many attempts had been made to take this strategic position, the regiment, commanded by Lt Col Edward Riddell, successfully re-took the Redoubt, dig in and hold it.

It was the battle that guaranteed the soldiers from the Cambridgeshires’ would be decorated for their skill and bravery by securing such an important stronghold that, in previous attempts, had resulted in failure and considerable loss of life.

This battle was part of the British Army's costly Somme offensive, and was a special achievement for the Regiment. By First World War standards the loss of life in this historic battle was small, with 32 killed and a further 186 wounded. The Redoubt was a series of trenches and dugouts, defended by many machine gun emplacements, situated on a high point overlooking the British lines. It had great strategic importance. For this attempt Riddle planned and led their assault on October 14th 1916 under a creeping barrage in front of the advancing soldiers. They managed to set up positions within the redoubt with support from the Royal Flying Corps, without loss of life. The fighting that followed developed into a fierce struggle, commanded by corporals and junior commanders with bayonets and hand grenades.

Bewildered by the Cambridgeshires’ bravery and determination the German occupants were overwhelmingly defeated and surrendered. The Cambridgeshires went on to hold the Redoubt for a further 24 hours before being relieved, having resisted several determined counter attacks and a fierce artillery bombardment.

In the midst of the living hell of the Somme, examples of extraordinary military achievement emerged such as the Regiment's storming of the Schwaben Redoubt. The Redoubt was central to the German defence in the Somme and was taken briefly by the 36th Ulster Division in July, being immediately recaptured in a German counter-attack. Between July and October it was attacked six times without success as the position always succumbed to the German counter attacks. But  Riddell won the case for massive artillery and air support based on lessons learned from the mistakes of other failed assaults.

The attack commenced at 2.45pm on the 14th October 1916. By closely following the creeping barrage they got into the Schwaben trenches with very few casualties. Four hours of hand-to-hand fighting with bayonet and grenade against a tough and aggressive German opposition followed. Despite several setbacks each dugout was cleared in turn and they bombed along the trenches until the whole site was in their hands.

Both sides ran out of grenades. Then instead of consolidating in the old German trenches, they moved forward 100 yards and under cover of darkness, dug a new defensive line by joining up shell holes and placing barbed wire in front of this new line. When the counter attack came at 4am next morning the German barrage was concentrated on their original trenches behind the Cambridgeshires’ new position. This enabled them to stop the following counter attacks dead in their tracks with rifle and machine gun fire. The German hold on the Schwaben Redoubt was broken at last and held by “The Territorial Fen Tigers” for 24 hours until finally relieved.

This success was subsequently mentioned in a following press report: "The splendid achievement in which the men so greatly distinguished themselves will earn for them the pride and admiration of the county whose name they bear”. 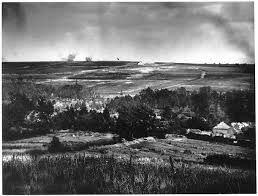 Shelling of the Schwaben Redoubt

In a series of monthly talks marking the 100 year anniversary of the Battle of the Somme, discover details of real life stories and explore the new technologies in use during the time of this landmark battle and the scientific advancements linked with these events. Join IWM’s First World War Project Manager Charlotte Czyzyk and hear the testimony of Alfred Reiffer, who served with one of the first tank crews during the battle. These stories are amongst millions which are being remembered on Lives of the First World War, IWM’s permanent digital memorial.

Last week Ann and I made one of our regular visits to the Northern Chamber Orchestra at Macclesfield. The main work was Beethoven’s violin concerto, magnificently played by Chloë Hanslip. 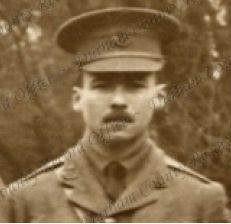 One of the other works was ‘The Banks of Green Willow’ by the English Composer George Butterworth. He was born in Paddington in 1885, but moved to Yorkshire, where his father ultimately became general manager of the North Eastern Railway.

After attending Eton and Trinity College Oxford, George entered the music profession. He worked with Ralph Vaughan Williams collecting English folk songs and the piece was composed in 1913. Butterworth enlisted on the outbreak of war and eventually became a lieutenant in the Durham Light Infantry. On 5th August 1916, when his unit were near Munster Alley, he was killed by a sniper. He was temporarily buried in Butterworth Trench, which had been dug as an advanced fortification. His men intended to reinter him later. Unfortunately, his grave was destroyed by shellfire and his body never recovered. He is commemorated on the Thiepval Memorial. He was aged 31.

Prior to his death he had been recommended for the Military Cross, which he was ultimately awarded.

As ever, articles and notices for the newsletter or website to Terry, by 4th Novemebr for inclusion in the next newsletter