It gives me great pleasure to welcome back Dr Bill Mitchinson to the Branch. Most of you will be aware that Bill was a past Chairman of the Branch and I hope I am maintaining his high standards. Given our venue, it is fitting that Bill will be talking about the Territorial Force (as it was then known), before the Battle of the Somme. I am sure we will be fully entertained. Sadly, I had to attend the funeral of Life Member Mike Platt last week. I am grateful for the support of several Branch members who were also present. It was a very moving experience. Mike was obviously well liked by the numbers that packed the chapel. He certainly brought pleasure and happiness to many people as, although the liturgy told us much of his home life, it was clear he was fun to be with. I am very pleased to say that our own website is now up and running. www. landcwfa.org.uk Although it is in its early days, please have a browse. I am very grateful to Trevor Adams for all the hard work he has put in. It will give us a much better profile. We will be able to display information, documents and your input on a rolling basis. I am aware that not everyone has access to the web, so there will still be Up the Line at the meetings. I am also therefore continually grateful to Ralph Lomas for finding time at his company to produce the monthly digest. Terry Jackson. Chairman.

A century on Shackleton’s Endurance expedition is remembered on a set of commemorative postage stamps and by Henry Worsley who attempted to recreate that epic 1914-16 journey.

Henry, who may be related to Frank Worsley, Shackleton’s Skipper, died thirty miles short of his goal in January, whilst attempting the solo trek. A magnificent effort which too date has raised £100K for charity.

The Endurance set sail south for the Antarctic in another Polar adventure led by Sir Ernest Shackleton on the same day that WW1 was declared by Great Britain. In December 1914 she got trapped in the pack ice and after its twenty-eight men abandoned her they floated on the ice until April 1916, when three boats were launched onto the open sea. Commander Frank A Worsley, DSO, OBE, RD, RNR vividly described “Shackleton’s Boat Journey” in the book of that title. Amazingly all twenty-eight men came back home to this country safely. However, two of them succumbed to the effects of the Great War.

Tim McCarthy, a native of Kinsale, County Cork, who enlisted in the Royal Naval Reserve as a Leading Seaman and served on S.S. “Narragansett” was killed in the Channel in March 1917 and is remembered on Plymouth’s Naval Memorial

Alf Cheetham, a veteran of several Polar expeditions, lost his life when serving on a mine-sweeper that was torpedoed ten weeks before the Armistice.

Michael Smith in his 2000 biography of Tom Crean “Unsung Hero – Tom Crean – Antarctic Survivor” says that: Another five members of the expedition were wounded, some severely.

Fighting had raged on the east bank of the Meuse at Verdun since 21st February. von Falkenhayn had been criticised for only attacking on one side of the river. On 6th March, German forces attacked on the other bank. Russian forces subsequently attacked Vilnison 18th March to try to draw 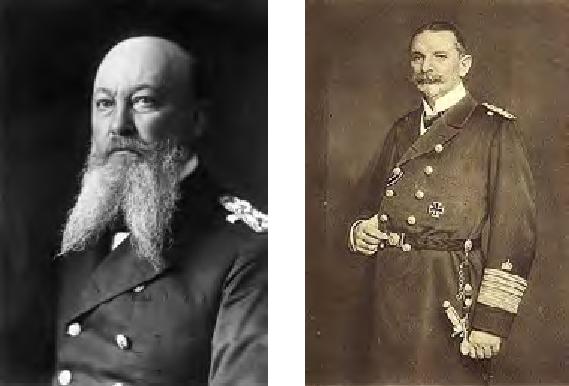 German forces from Verdun. Ultimately, they suffered huge losses and had made little progress.

Meanwhile, on 16th March, Von Tirpitz (left photo) had offered his resignation to the Kaiser. The Admiral’s pressure to begin unrestricted submarine warfare in February unsettled the Emperor, who was wary of antagonising America.

Subsequently on 16th March Tirpitz offered his resignation and to his surprise it was accepted. He was subsequently succeeded by Admiral von Cappelle (right photo). Ed.

March 1915, Kitchener reviews the Manchester Pals at the Town Hall

On 21st March 1915 Lord Kitchener came to Manchester to review the Pals outside the Town Hall. The First Brigade from Heaton Park, the Second brought by rail from Morecambe and the Salford Pals all formed up for a march past which took well over an hour to pass Kitchener. Nearly 12,000 men took part.

The following day the Manchester Guardian, which had originally strongly opposed the war, published this piece about the parade. It sums up how communities across the country felt about their New Armies of volunteers:

“Only now and then in these months of war has it been forced fully home to us that we are living history, but the dullest could not see the march of the twelve thousand yesterday without knowing that of this his children’s children would be told. Nor could he see it without a deep and quickening sense of his personal relation to the facts behind it. For Manchester’s army is Manchester, and the New Army is Britain, in a way no soldiers ever have been before or, it is hoped, will ever need be again. The people who cheered and the people who marched were not spectators and a spectacle. 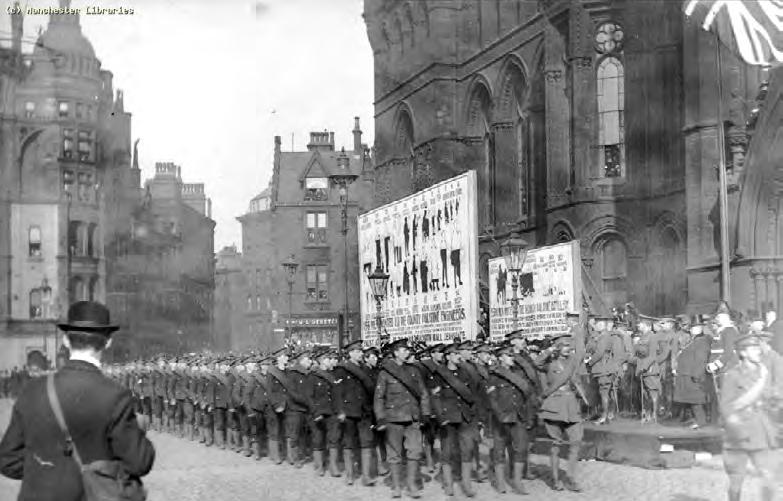 They were kin in the truest sense, and every eligible man who watched the City Battalions swing by must have felt it an incongruous thing that he was not on the other side of the barrier.” Manchester Guardian, 22nd March 1915