Good evening and welcome to the February meeting. I am pleased to welcome Terry Dean to the Branch again. Terry is actively involved with our neighbouring Branch, Lancashire North. It is interesting to see how many of the senior military figures of World War Two gained their experience at the sharp end of the previous conflict. Patton, MacArthur, Brooke, Rommel and a diminutive Austrian corporal were a few of those who served on the Western Front. Tonight, Terry will look at how the early career of a man who became Britain’s most well-known commander was influenced by a senior officer of the day. I am pleased to confirm that Jonathan Bell has kindly agreed to talk to us at the May meeting. Details of his talk on the RAMC can now be seen on the WFA website. Terry Jackson, Chairman.                Brigadier Sandilands & Captain Montgomery in 1917 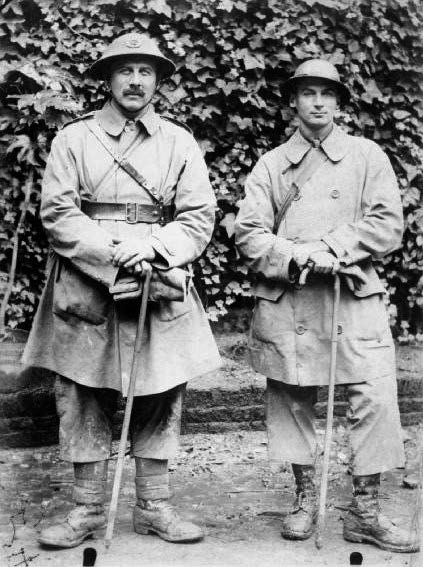 Next talk: MARCH 11th The TA before the Battle of the Somme by Dr Bill Mitchinson Within weeks of the outbreak of war, units of the TF were deployed to France, Egypt and later Gallipoli. They were dispatched abroad as individual battalions, field companies and field ambulances as well as complete brigades and divisions. Their presence proved vital as guardians of the Empire and as essential support to the Regular Army. They fought in every major British battle on the Western Front from 1st Ypres onwards and in 1916 were ready to play a significant role in the forthcoming Battle of the Somme. This talk will analyse the importance of the TF’s operational contribution to the BEF before the Somme opened and examine its role within the wider Allied war effort.

This excellent presentation was accompanied by numerous photographs and covered the complete spectrum of the ‘beautiful game’. The dedicated Footballers’ Monument can be seen at Longueval. Ed

In a well-illustrated presentation, Steve Williams looked at the many footballers who fought for the British in World War One. As in other professions that provided men some survived, whilst others were killed or wounded. One of the earliest football connections of course, was the purported ‘International Match’ during the 1914 Christmas Truce when the Germans beat the BEF. The war also embraced men from the highest level of professional players, to the pure amateurs playing for local clubs. However, initially, many professionals did not enrol on the outbreak of war. This has sometimes has drawn comparisons with other sportsmen such as those from rugby and cricket who joined up early on. However, it has to be born in mind that many top level players of these two sports were often amateurs, sufficiently remunerated from their profession to be able to play for no wages. On the other hand, many professional footballers would have just signed new contracts in August 1918. It was not certain how long the war would last and they would be wary of breaking their agreements with their employers. The local league amateur players covered the whole of the country and Steve discussed some of those he had come across in his research. There were several men who became well known. Perhaps the most famous of a team enlisting was Hearts of Midlothian. Thirteen of the team, which was heading for the Scottish Championship, signed up into 16th Battalion Royal Scots. Five of the original team died in the war, including three on 1st July 1916. Perhaps two of the most famous casualties were Donald Bell and Walter Tull. Donald Bell played for Bradford Park Avenue and was awarded the VC for attacking a German post on 5th July 1916. He repeated this attack five days later, but unfortunately was killed. The action took place near Contalmaison and those of you, who went to the dedication of the 12th Manchester’s memorial with the Branch, will be aware of the monument to him there. He is buried in Gordon Dump Cemetery, Ovilliers-La Boiselle. Walter Tull was the first black man to receive a commission in the British Army. He had played for Spurs and Northampton. He had been Mentioned in Despatches. He was killed on 25th March 1918 during the Spring Offensive. He has no known grave and is remembered on the Arras Memorial. 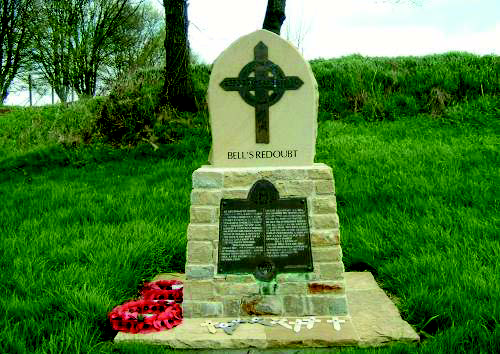 The Ypres-Comines canal, ran south east from the town, cutting through the front lines about 3 miles from the Cloth Hall. This was the position at the end of the First Battle of Ypres and it was similar in 1916, the Second Battle having not altered things. Facing the British was the village of

Hollebeke; on the left was the hotly-contested ground of Hill 60 and Zwarteleen and on the right the hotspot at St Eloi. On the northern embankment of the canal, a spoil-heap, created when the canal was excavated, gave the British front an unusual observation advantage over the enemy. If the enemy held it, the view across the rear areas of the Salient to Hill 60, towards Ypres and down to Voormezele would have made the Salient difficult to hold. The position had to be held. The German front line fire trench was 200 yards ahead of this feature, which the British called the Bluff, and the Germans the Grosse, or Kanal, Bastion. British trenches ran around the forward base of the Bluff. These were around the front of the lips of a number of mine craters blown in October and November 1915 and in January 1916. Communication trenches ran back over the Bluff itself. The canal cutting was steepsided, and over 100 yards wide. The trenches continued on the other side, with only a single plank bridge connecting the two banks. 17th (Northern) Division had relieved 3rd Division in the canal sector between 5 and 8 February 1916, and placed 51st Brigade on a 1300 yard front at the Bluff position. It was also responsible for the south bank with 52nd Brigade there. Enemy shellfire began to fall on both brigade fronts in the morning of 14 February, intensifying on the Bluff from midafternoon. (The enemy was also shelling 24th Division at Hooge at this time). British artillery began to retaliate and the infantry at the Bluff stood by to meet an anticipated attack. All telephone wires were cut by the shelling, which severely affected the ability of units in the front line to call for support. German tunnellers blew three small mines at 5.45pm, one under the Bluff (which buried a platoon of the 10/Lancashire Fusiliers sheltering in an old tunnel) and two slightly further north, under the 10/Sherwood Foresters. German infantry then attacked between the canal bank and the Ravine. They entered and captured the front line trenches but were driven out of the support lines behind the front. Small local counter attacks over the next two days failed. The all-important Bluff position had been lost, and it would take more than localised efforts to regain it. The operations in the area of the Bluff from the start of the enemy attack to noon on 17 February cost the British 1,294 casualties.

Acknowledgements to - The Long, long trail