Please see "Venue" for details of the times and where we meet.

We are happy to have visitors at any of our meetings.

If you do not already receive emails from Ralph/Eric about Branch meetings (This email address is being protected from spambots. You need JavaScript enabled to view it.) and the newsletter, please email him to add you to the list.  If all goes to plan, he will email you a few days before the meeting with the details of how to access the Zoom meeting.

Meetings are back at Greek Street in Stockport. See the "News" section for the latest situation, as and when we know what is happening.

Due to the original speaker being unable to attend due to health reasons, the Branch was fortunate that at short notice Denise North of the East Lancashire WFA stood in and gave an account of the Quintinshill Rail disaster. This caused the death of over 200 soldiers and several civilians in 1915. It involved soldiers from on a special train taking them for embarkation to Gallipoli from Liverpool. The men were mainly from the 1/7 Leith Battalion Territorials.

The disaster was a multi-train rail crash which occurred on 22 May 1915 outside the Quintinshill signal box near Gretna Green in Dumfriesshire, Scotland. It is the worst rail disaster in British history.

The Quintinshill signal box controlled two passing loops, one on each side of the double-track Caledonian Main Line linking Glasgow and Carlisle (now part of the West Coast Main Line). At the time of the accident both passing loops were occupied with goods trains, one carrying coal and a northbound local passenger train was standing on the southbound main line.

The first collision occurred when the southbound troop train travelling from Larbert to Liverpool collided with the stationary local train. A minute later the wreckage was struck by a northbound sleeping car express train travelling from London Euston to Glasgow Central. Gas from the Pintsch gas lighting system of the old wooden carriages of the troop train ignited, starting a fire which soon engulfed all five trains including the coal train which added to the problem. Many soldiers had been killed by the impact and others were trapped inside the wooden carriages. Several fatalities also occurred on the northbound express and the local train.

Two men were responsible for controlling the signal traffic-Tinsley and Meakin.   However, they had not complied with safety requirements at the time of changing shifts. Ultimately, this had meant that the troop train ploughed into the stationary local train and shortly afterwards the sleeper crashed into the wreckage. 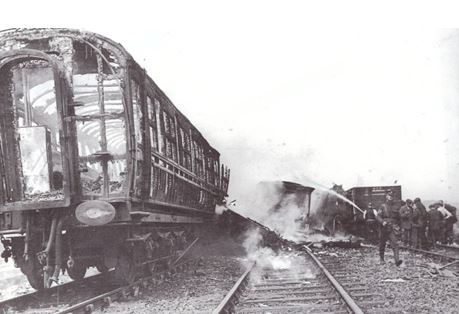 Only half the soldiers on the troop train survived. Those killed were mainly Territorial soldiers from the 1/7th (Leith) Battalion, the Royal Scots heading for Gallipoli. The precise death toll was never established with confidence as some bodies were never recovered, having been wholly consumed by the fire. The roll list of the regiment was also destroyed in the fire. Many soldiers died in the troop train and many of the survivors were trapped inside. There are reports that an officer shot some men who were hopelessly trapped and others used their own weapons to avoid being consumed by the fire. The official death toll was 227 (215 soldiers, 9 passengers and 3 railway employees).

Not counted in the 227 were four victims thought to be children, but whose remains were never claimed or identified. The soldiers were buried together in a mass grave in Edinburgh's Rosebank Cemetery, where an annual remembrance is held.

An official inquiry, completed on 17 June 1915 for the Board of Trade, found the cause of the collision to be neglect of the rules by the two signalmen. With the northbound loop occupied, the northbound local train had been reversed onto the southbound line to allow passage of two late-running northbound sleepers. Its presence was then overlooked, and the southbound troop train was cleared for passage. As a result, both were charged with manslaughter in England and then convicted of culpable homicide after trial in Scotland; the two terms are broadly equivalent. After they were released from a Scottish jail in 1916 they were re-employed by the railway company, although not as signalmen. (It has been intimated that as there were then several different companies involved, staff were often pressurised to take short cuts to prevent any advantages being given to company rivals).

Prior to the commencement of the meeting, stewardship of the Branch Chairman was handed over to Eric Hunter and thanks were given to Ralph Lomas for all his past contributions and his commitment to act as Treasurer.

Dr John Seddon gave the Branch an exhaustive account of how, having realised that the soldier’s standard weapon, the trusted Lee-Enfield was restricted in its usefulness in the static nature of trench warfare. Furthermore, in order to inflict the maximum damage on the enemy it was necessary to hit them with as much ordnance as possible whilst they were in the firing lines and the supply chain behind

The extent of the change of weapons and tactics is covered in the preamble to the talk covered in last month’s introduction. However, in 1915, the BEF was committed to taking the war to the enemy. Some gains were made at the Battle of Neuve Chapelle, but subsequently the lack of sufficient and reliable ordnance was overcome by possibly Lloyd George’s only positive contribution to the war effort.

Initial efforts to overcome the lack of static ordnance were tackled by improvisation, including the ubiquitous jam tin grenade. The Indian Corps, in particular, were adapt at improvising bomb factories. In time the Pippin Rifle Grenade became the standard rifle grenade and 1.5 million were produced.

Protection was provided by a variety of items. Metal body armour was only useful in static positions. It was too restrictive to be used in actual assaults. The one successful British aid was the introduction of the Brodie steel helmet. This was relatively effective within trenches against airbursts, but would not deter a rifle bullet. The French and Germans also provided their troops with helmets; the enemy’s being more effective.

This was an in depth account of the ordnance used in the Great War, supplemented by large number of photographs and illustratons.