The story of the “Peel Castle”

During the early stages of the War, the Admiralty found it necessary to have auxiliary ships fast enough to overtake merchantmen and large enough to accommodate sufficient men to form boarding parties and prize crews.

While Peel Castle was engaged on the Liverpool and Douglas service, a naval constructor came from London to examine the ship. On his recommendation, it was chartered on the completion of the summer service. Five weeks fitting out was done by Cammell Laird of Birkenhead. Accommodation was made for one hundred officers and crew, the military and navigating duties being undertaken by Royal Naval and Royal Naval Reserve men.The engine department was staffed mostly by employees of the IOM Steam Packet Company.  Peel Castle was commissioned on 14 November 1914, under the command of Lieut-Commander P E Haynes, RNR. He was an officer with considerable naval experience, who had been in the service of the P & O Company for many years.

Upon completion, the ship sailed under sealed orders from Birkenhead on 22 November 1914. After undergoing gun trials in the Channel, she proceeded to sea. It was the first ship of this class to sail from Liverpool. After sea trials, she arrived at Scapa Flow on 24 November and after coaling, proceeded to Plymouth for repairs to damage caused by the rough weather. She then continued to the Downs to patrol from January 1915, to February 1916. 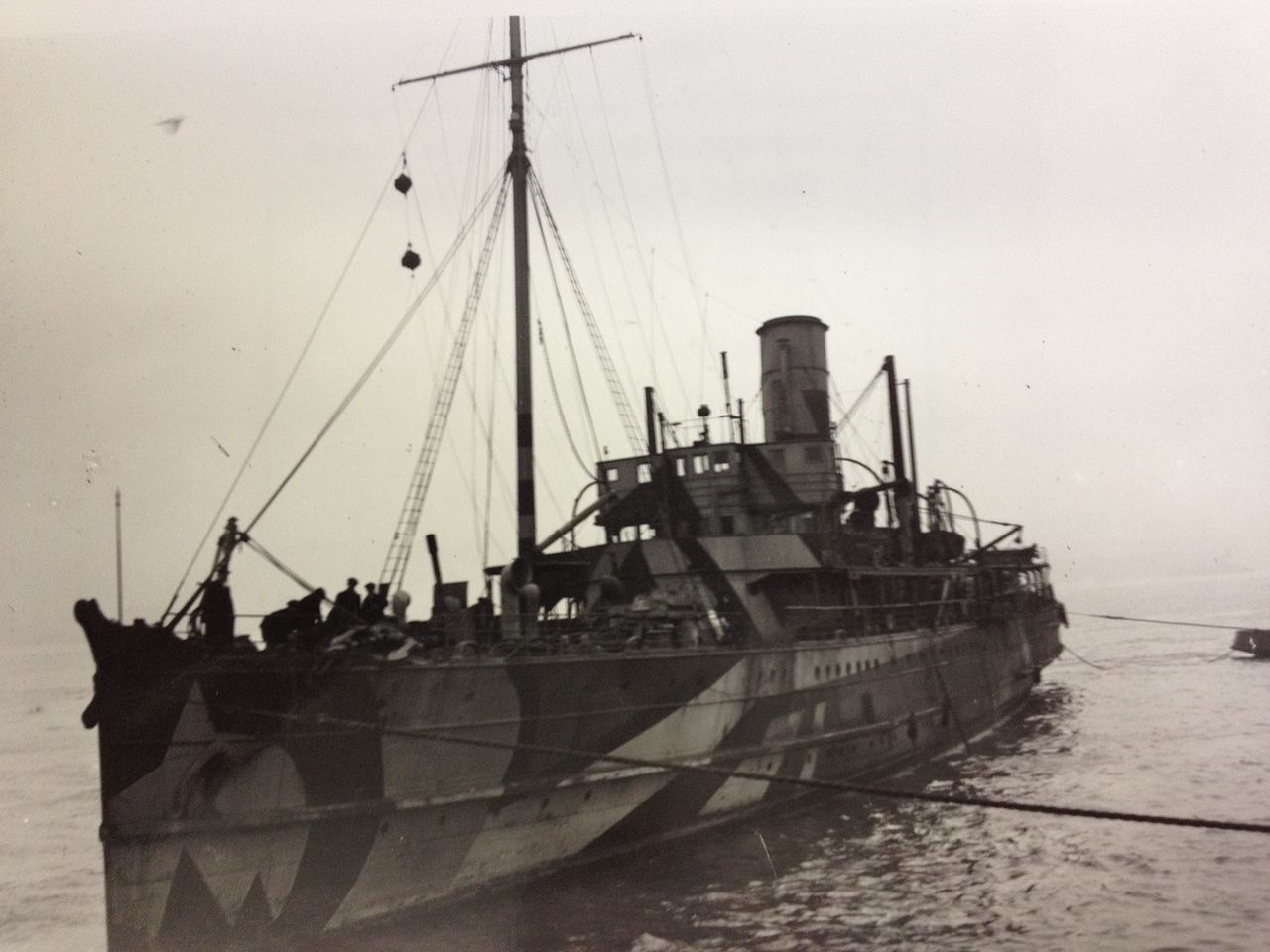 The Peel Castle in war service

The Dover Straits had been closed by our mine-fields and anti-submarine nets. All vessels bound for Continental ports were examined before being allowed to proceed. Peel Castle became attached to the Downs Boarding Flotilla, a portion of the Dover Patrol under Admiral Bacon. The narrow stretch of water extending between the Goodwin Sands and the Kentish coast at this time was the busiest spot on our coasts for shipping.

This was a huge undertaking. During a period of six months, 21,000 merchant vessels passed through the Patrol, an average of 115 vessels per day. The work of the patrol boats was carried out meticulously and only four per cent were sunk, with a loss of seventy-seven officers and men. Her duties consisted of regulating traffic, examining neutral ships for enemies and contraband and as a guard ship in the Downs. She would spend ten days at sea, then four in Dover port for restocking.

Her first job was to stop a Greek ship trying to slip away in the dark. Soon after she fired at a large ship flying the Red Ensign that failed to stop whilst passing through the Downs. The ship then fired at Peel Castle from a large calibre weapon, so it was left to more appropriately armed vessels to give chase.

The Admiralty had information that Germans were returning home as stowaways in bunkers of neutral ships, so she was ordered to send an engineer officer and a party of stokers to search the engine-rooms and bunkers of neutral vessels, especially those of ships hailing from United States ports.

On 1 May 1915, a Douglas engineer and a party of stokers were searching a Dutch ship whose engine-room staff were mustered together in the engine-room. One of the stokers going through a coal bunker was surprised to see a pair of eyes staring at him from behind a heap of coal. He quickly got out and returned with the engineer. They discovered a stowaway, who was taken prisoner. On examination by an interpreter on Peel Castle, he was proved to be a prominent New York business man. He was promptly sent ashore and interned. As he was the first stowaway to be captured, the crew were congratulated on their vigilance. At this time, American newspapers often found on stowaways were more conciliatory to the enemy.

One of Peel Castle’s interpreters was a Belgian formerly in the service of the Antwerp Harbour Board. He could spot a German immediately and could tell from which part of Germany he came by his dialect. On 11 June 1915, an engineer and search-party examining the Dutch steamer Rotterdam captured the second engineer of the German cruiser Prinz Eitel Frederick on the Dutch ship, disguised as a greaser. His ship at that time was interned in a United States port.

The ship continued on patrol engaged in various activities until on 7 February 1916 disaster struck. At 1 am, a fire broke out in a room above the magazine. Despite using all the fire hoses, the fire spread and it was necessary to flood the magazine. At this time, it was realised that Mr Steele, one of the interpreters, was missing. Fortunately, the wind was light and it was possible to lower the lifeboats as a precaution. Thirty men remained on board to work the hoses and pumps. The remainder boarded the lifeboats. Meanwhile the tug, Lady Brassey, came alongside with her hoses, which appeared to contain the fire. However, at 3 am, the amidships caught fire and ammunition by the guns began to explode, causing the ship to be abandoned. Eventually, the tug got a tow rope onto Peel Castle and towed the ship to shallow water where it would not block the passage of other vessels.

The crew were eventually taken to HMS Louvain. The next day, the Captain and some men returned to their ship and put out the smouldering fire. Unfortunately, they found the remains of Mr Steele. On 13 February, Peel Castle was towed to Chatham Dockyard for a refit.

It took six weeks to put Peel Castle once more into condition for further work. On 9 August 1916, she went back to her old job in the Downs. Things there were then quite lively. German submarines were very active and Peel Castle had to take over the crews of two ships which had been torpedoed. Meanwhile, German aeroplanes dropped bombs on Dover and Deal.

Subsequently, the ship was ordered to engage as an escort for the Norwegian convoys. This was somewhat disconcerting as an earlier convoy had been completely destroyed by German cruisers and Commander Haynes was also promoted to Captain RNR in charge of the Atlantic convoy. She was fitted out for her new task at Leith to enable the use of depth charges and anti-mine paravanes.

Her patrol area was between the Orkneys and Shetland Islands, a favourite route for enemy submarines heading for the Atlantic. Subsequently she was sent to protect the Humber-Tyne Convoys. The deepwater between Flamborough Head and the Tyne was ideal for submarines and the enemy had much success that a new channel had to be swept through the minefield.

Convoys ranged from thirty to sixty ships, sometimes as slow as seven knots and were escorted by a destroyer. Peel Castle kept observation on the seaward side at fourteen knots going up and down the convoy.

On the day after Armistice Day, the ship took a final convoy south and docked at Immingham until the end of December, when it returned to the Downs. She then passed Dover and suffered two days in the Channel in a heavy gale that washed away her forward anti-aircraft gun, eventually arriving in Liverpool on 4 January 1919, where the crew were paid off. She still had some work to do. She was fitted out at Birkenhead to bring home troops from the Western Front. She worked from Southampton until May, when she was refitted at Liverpool to resume her original work for the IOM Steam Packet Company.