The "Farina" helmet was one of the early developments of the combat helmet in World War One. After the invention of gunpowder, the medieval helmet and armour lost their importance and disappeared. During World War I, the helmet was to be used again on the battlefield.

This form of helmet was first designed for use by sentries in forward positions as a protective alternative to the cloth Berroto cap and other forms of headdress used in the Italian army during the opening stages of the First World War. Made by the Milan firm of Elmo Farina, it was adopted on a wider scale of issue from October 1915 by the spearhead 'wire cutting companies'. These were specialist volunteer engineer troops who led the assault and cleared wire entanglements ahead of the infantry, vital tactical operations which required great courage and skill. The helmet weighed 2.85kg (6lbs 5oz), and would be worn over a padded cloth cap. In addition, the 'compagnie della morte' wore additional body armour (weighing 9.25kg - 20lbs 6oz), thick leather gauntlets, knee protectors, and carried specialist tools including wire cutters mounted on poles. It has been suggested that the helmet and body armour could be effective against rifle ammunition fired at distances down to 125 metres. 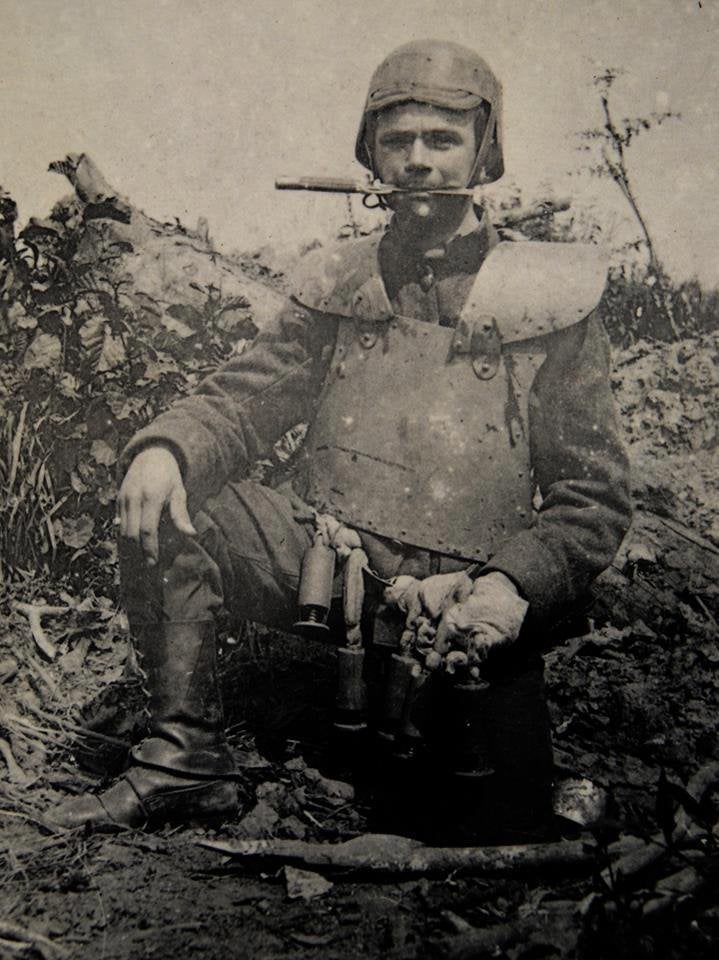 The helmet was designed and produced by the Engineer Ferruccio Farina, whose laboratory was in Via Ruffini in Milan. The name and address were written on an oval stamp inside the front brim of the helmet which also had the size in Roman numerals (I-II-III). The helmet was composed of three main parts painted with green-grey opaque non-glare paint. The shell was an oval metal-plate fixed by eight tacks; the fore brim was formed by four overlapping steel sheets fixed together by five tacks; the back brim was also of metal-plate and four centimetres high.

At ears-length there were other elements in plate metal and a grey leather liner with a metal buckle. The front brim of 12 or 8 centimetres distinguished the "high" model from the "low" model. The "high" model weighed 2250 gr. while the "low" model weighed 1850 gr. In the first models there was no ventilation system and so it was provided later via a plate shell outside the protection brims, permitting better air circulation. These models with ventilation had both the versions with "high" brim and "low" brim. The problem of ventilation was solved when a crest similar to the "Adrian" helmet was adopted to cover a hole on the top of the shell. This change was made on the helmet of both models.

There was no standard padding and initially the helmet sat on the soft cap which was worn back to front.. Later, cloth head-support was stuffed with horse hair and cotton wool. In some cases, two pieces of natural rubber were fixed inside the front brim to improve helmet stability. In spite of the attempts to improve stability of the helmet, the "Farina" helmet remained uncomfortable and heavy.

The production ceased with the subsequent distribution of the 1915 French ‘Adrian Model’ to Italian forces.